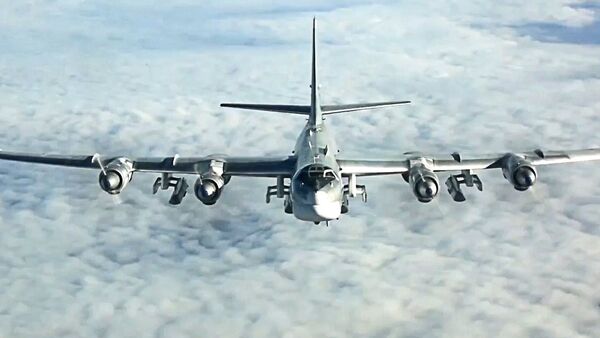 Two Russian Tu-95MS strategic bombers carried out on Thursday a 10-hour patrol flight over the neutral waters of the Bering Sea as part of the Ocean Shield-2019 large-scale naval exercise, the Russian Defense Ministry said.

“Two Tu-95MS strategic bombers of the Russian Aerospace Forces, performed flights over the neutral waters of the Bering Sea in the framework of the Ocean Shield-2019 operational exercise,” the ministry said in statement.

"At certain stages of the flight, the Russian bombers were followed by the US Air Force F-22 and F-18 fighters," the statement said.

Earlier in the day NORAD stated via Twitter that "two F-22 and two CF-18 fighter aircraft supported by an E-3 Sentry, a KC-135 Stratotanker and a C-130 Tanker from the NORAD positively identified and intercepted two Tu-95 Bear bombers in the Alaskan and Canadian ADIZ on August 8."

The Russian aircraft remained in international airspace in the Beaufort Sea and at no time did the aircraft enter United States or Canadian sovereign airspace.

The Ocean Shield-2019 naval drills, involving about 70 combat ships and support vessels and 58 aircraft of the Russian Navy and the Aerospace Forces, are being held in the Baltic Sea on August 1-9.