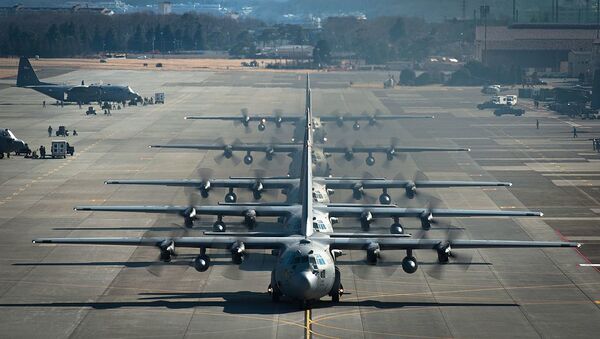 The US Air Force has barred more than 100 of its C-130 Hercules transport aircraft from flying after “atypical cracks” were found on one of the aircraft’s central wing joints.

USAF Air Mobility Command commander Gen. Maryanne Miller ordered the grounding of 123 of the service’s 450 Hercules aircraft on Wednesday, directing aircrews to inspect their aircraft for signs of cracking on the “rainbow fitting” joints that hold the aircraft’s wings to the top of the fuselage, according to an August 7 press release.

While the release describes the cracking as “atypical,” it’s worth noting that, according to a 2008 paper on the subject published in the journal IEEE Aerospace Conference Proceedings, “the primary cause of the cracking is from common fatigue that occurs almost exclusively on the in-board rainbow fittings. The secondary cause of cracking is from stress corrosion that occurs mainly on the in-board and occasionally on the out-board rainbow fittings.”

The aircraft selected for inspection are those with more than 15,000 flight hours and that have not yet received the extended service life center wing box, on which the rainbow fittings sit.

“If cracking is identified during the 8-hour inspections, a depot-level replacement of the rainbow fitting will be required,” the press release states. “Aircraft that are inspected and determined to have no cracking will be immediately returned to service.”

The statement also notes that the temporary removal of the aircraft from service won’t “impact ongoing C-130 support to overseas contingency operations.”

AMC spokesman Maj. Jonathan Simmons told Defense News Thursday that the repairs will take “approximately one to two months,” but that they’re “dependent on depot level availability and capacity.”

Lockheed has built over 2,500 of the prop-driven C-130 transports since their introduction in 1956, according to the company. The plane’s many variants, from gunship to transport aircraft to weather monitoring and firefighting, have seen it enter the service of numerous military and civilian authorities, from the British Royal Air Force to the Royal Saudi Air Force, US National Weather Service and US Forest Service. The plane can lift 72,000 pounds of payload.