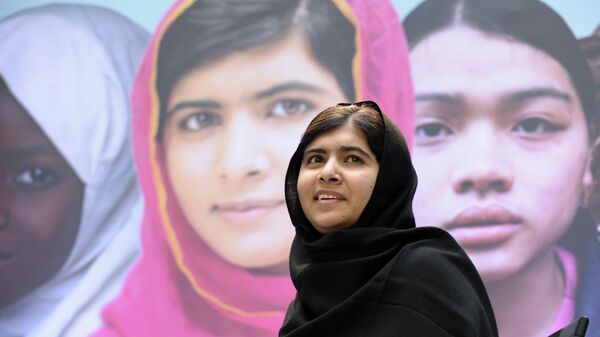 New Delhi (Sputnik): Pakistani-origin Nobel Prize Laureate Malala Yousafzai has been targeted online as she shared her concern over the Indian government's decision to revoke special status for the state of Jammu and Kashmir and bifurcate it into two federally administered entities earlier this week.

“The people of Kashmir have lived in conflict since I was a child, since my mother and father were children, since my grandparents were young. Today I am worried about the safety of the Kashmiri children and women, the most vulnerable to violence and the most likely to suffer losses in conflict,” Yousafzai wrote on social media.

The people of Kashmir have lived in conflict since I was a child, since my mother and father were children, since my grandparents were young. pic.twitter.com/Qdq0j2hyN9

The statement, however, evoked various responses from Indian, as well as Pakistani Twitter users.
Social media users were quick to remind Malala of Pakistan’s largest province of Balochistan which is suffering from an insurgency by Baloch nationalists against the government of Pakistan.
Indian army veteran Gaurav Arya and journalists slammed Malala for her comments.

Hello @Malala, you have never seen Kashmir but you feel so strongly about it. Not far from your home in Swat, is Balochistan. Balochis have also lived in conflict since you were a child, since your mother and father were children, since your grandparents were young. Ring a bell? https://t.co/GAZMIBsLf2

The people of Baluchistan have lived in conflict since you were a child, since your mother and father were children, your grandparents were young.

Same as Minorities Hindu, Christian, bauddh in Pakistan are facing persecution since then & on verge of cessation.

Not a word against Pak sponsored terror in Kashmir. Someone who suffered a terror attack has no guts to speak against terror...!! Lost respect Malala 👎

Activists of the pro-Balochistan movement went all guns blazing at Malala and reminded her of the crimes against the Baloch people.

Hello @Malala
Did you hear the voice of #BalochMalals who are facing #PakWarCrimes, who they have sacrificed millions lives in the line of #Independence of Balochistan.
lets commemorate #BalochistanIndependenceDay https://t.co/BpY30fmxb0 #14AugustBlackDay

Anguished over her remark, a section of netizens slammed her for not speaking out against terrorist attacks in Kashmir.

This Malala is scam ! she goes on gives speeches abt women empowerment for empowered working woman in JAPAN. But not 1 word abt Pak human rights violation on Hindus.
This fraud is partying all over the world in the name of Feminism and Human Rights !!! Shame on her !!!