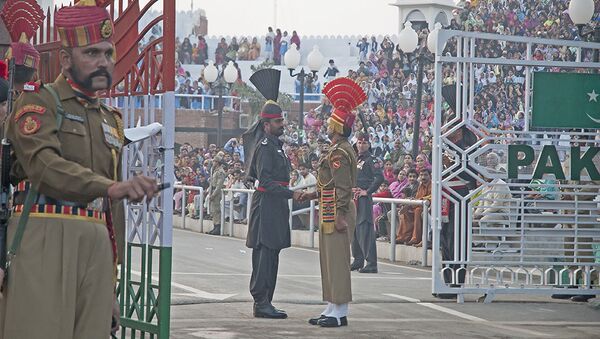 Tensions between the two nuclear-armed foes have reached a boiling point following India's decision to strip the state of Jammu and Kashmir, a predominantly Muslim region, of its semi-autonomy.

Pakistan's foreign minister has downplayed tensions with India over the Kashmir issue, reassuring that the military option is off the table.

Shah Mahmood Qureshi told a news conference on Thursday that Islamabad is instead seeking a political and legal response to India's move to revoke Kashmir's long-held special status.

He said he would soon travel to China to discuss the situation. Beijing earlier suggested that India could undermine the territorial sovereignty of the Kashmiri people, to which New Delhi replied that it was an “internal” matter.

Pakistan, which has historically supported the Muslim minority of India living in Kashmir, condemned the downgrading of Kashmir's status. Pakistan expelled India's ambassador and vowed not to send its own envoy to New Delhi, partially closed its airspace to Indian flights, and threatening to halt trade with its neighbour. New Delhi called the move regrettable and urged Islamabad to reconsider its step.

A Week of Turmoil

On Monday, Narendra Modi's government pushed for the removal of the special status of Jammu and Kashmir – the Indian-controlled part of the Himalayan region of Kashmir – through a presidential order, which was later greenlit by lawmakers.

By jettisoning an article of the national constitution, which the government said was temporary, it will effectively put Jammu and Kashmir on the same footing as other Indian states, removing its quasi-autonomous decision-making powers. It will split the state into two union territories, controlled by the federal government, and stop favouring Kashmir citizens with special benefits other Indians don't have; under the old legislation, Kashmiris were the only ones with the right to buy property in the state and occupy state government positions.

In the run-up to the move, the government placed Kashmir under an indefinite security lockdown, reportedly suspending internet and mobile coverage and placing several political leaders under house arrest. Authorities deployed extra troops and evacuated thousands of pilgrims and tourists over the weekend, saying they received an intelligence warning of terror attacks on the ongoing pilgrimage.

Both states have laid conflicting claims to Kashmir since gaining independence in 1947 and they've waged two wars over the territory, but control only parts of it. The so-called Line of Control, agreed upon in 1972, now serves as the de facto border between the two nations in the region.

India's portion of the disputed territory – known as Jammu and Kashmir – is the only Muslim-majority state in the Hindu country. It has been in the grips of Islamist insurgency for three decades; India accuses Pakistan of backing Kashmir-based militants, but Islamabad insists it only provides diplomatic and moral support to Indian Muslims.