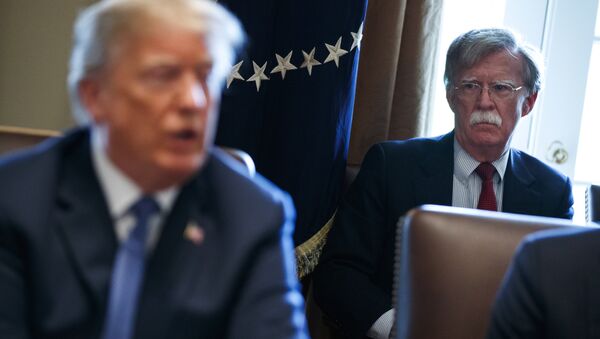 © AP Photo / Evan Vucci
Subscribe
Iran’s President Hassan Rouhani has reiterated his stand that if US President Donald Trump wants to start negotiations with Tehran, sanctions must be lifted against his country before everything else. Journalist and political commentator John Steppling expressed his opinion about the story.

Sputnik: Iran’s President Hassan Rouhani has reiterated his stand that if US President Donald Trump wants to start negotiations with Tehran, sanctions must be lifted against his country before everything else. How significant is this most recent statement from Iran?

John Steppling: Well, it's consistent with the Iranian position all along. They reject the idea of these photo ops with Trump when they know that Bolton in Pompeo and all the anti-Iranian hardliners are the real engine behind US policy and have no intention of lifting sanctions. Washington is facing a situation in which allies are fleeing, a Germany recently refused to join this so-called naval mission in the region and Britain only had one ship available to lend to that and nobody quite knew what the mission was anyway. The broader picture is about what Washington can actually achieve beyond hurting Iranian civilians with these sanctions which indeed it's doing.

Sputnik: Taking into account the recent events in the gulf, is the US expected to lift sanctions against Iran in the near future? Can we expect a movement away from this campaign of the maximum pressure that been in effect for some time now?

John Steppling: The problem for Washington right now is that nobody in Europe, none of the NATO countries want to be used as a shield for US interests and be exposed to potential actual conflict with Iran. Nobody wants to participate in this; Britain’s seized an Iranian tanker in Gibraltar illegally but that's going to be released in a month - the United States actually has very little leverage and very few allies and the Turkey situation looms over all this too. Turkey is probably a 'lame duck' member of NATO - they're not going to remain with NATO if they keep buying Russian weapons and striking deals with Eastern nations; they're gone. Once they leave NATO, NATO may be itself a relic of an earlier era because it's not serving any purpose and it's not helping Washington. Washington is just running out of leverage. The truth is that while the sanctions hurt Iran they're nowhere close to revolting against the government. They know what happens when the US initiates regime change, they saw what happened in Libya - they see the history of the US in this region. The only fear that Iran really has is that the Saudis will attack as US proxies but even there it seems very unlikely that Washington can foment any kind of actual war. Their leverage is limited and Britain looks like Washington's lapdog, which it is but they're contributing little end and have little relevance of all of this.

Sputnik: Earlier this week it was announced that Britain would be joining the US in a maritime partnership to protect oil tankers operating in the Gulf. How does this most recent response from Iran implicate the creation of this partnership with Britain and the US?

John Steppling: The partnership sounds good on paper what it actually looks like would be the real question. What is that meant to look like in practice in the Straits of Hormuz? I mean that region is patrolled by Iranian ships, they have missiles on the land aimed at the Straits, on the other side Oman and the UAE he controls those waters and there's this very narrow international channel of something 38 kilometres or something. What are British ships, I believe there are only two British ships now in the region, but what are they going to do exactly? What is this partnership meant to achieve? This partnership doesn't seem to be much more than a kind of a face-saving a ceremonial bit of paper. I don't know what else it is.

The views expressed in this article are those of the speaker and do not necessarily reflect those of Sputnik.
000000
Popular comments
Gone are the days of the western swine imposing their will, using allies as cover. Iran will not be subjugated to the dictat of imposters from dc, washington or london.