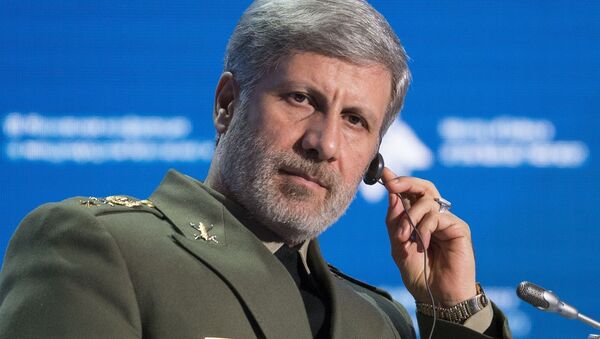 On Tuesday, Israeli media reported that Foreign Minister Israel Katz had agreed to take part in the US-led maritime security pact against Iran in the Persian Gulf after meeting with a senior official from the United Arab Emirates.

The formation of a US-led security mission in the Persian Gulf would cause a dramatic decline in regional maritime security, while any Israeli involvement in the operation may carry utterly catastrophic repercussions, Iranian Defence Minister Brig. Gen. Amir Hatami said, as quoted by IRNA.

“The region should not be an area for foreigners,” Hatami said, speaking in a conference call with his counterparts from Qatar, Kuwait and Oman on Thursday.

“There is no doubt that the countries of the Persian Gulf region should ensure security in the region. The Islamic Republic of Iran is also an important country for maintaining stability in the Gulf,” the minister said.

Commenting on Operation Sentinel, the US-proposed effort to deploy a military coalition to ensure freedom of navigation through the Persian Gulf, the Strait of Hormuz and the Gulf of Oman, Hatami stressed that such a coalition would only have the opposite effect.

“The military coalition that America is seeking to form with the excuse of ‘securing maritime transport’ will only increase insecurity in the region,” the defence minister stressed, adding that Washington itself, not Tehran, was the primary source of tensions in the region.

As far as media reports of the potential involvement of Israel in the US-led coalition are concerned, Hatami warned that Israeli participation in the coalition would be “highly provocative, and could have disastrous consequences for the region.” The senior officer did not clarify what these ‘consequences’ might be.

Hatami called on Iran’s Gulf nation “brothers” to hold “constructive talks” to ensure maritime security in the region by themselves instead of depending on outside powers.

Tensions in the Persian Gulf escalated dramatically in May, following a series of sabotage attacks on tankers off the coast of the United Arab Emirates. Two more tankers carrying ‘Japan-related cargos’ were sabotaged in mid-June, in the midst of Japanese Prime Minister Shinzo Abe’s visit to Tehran. The US, which sent a carrier strike group to the area in early May, blamed Iran for both attacks. Tehran denied the allegations, calling the attacks suspicious and accusing the US and its regional allies of deliberately exacerbating tensions. On 20 June, Iran shot down a US spy drone, bringing the two countries to the brink of war. On 20 July, the Revolutionary Guards seized a British-flagged tanker in the Strait of Hormuz, accusing it of dangerous manoeuvres, prompting London to announce that it would be forming a European-led coalition in the Gulf. The UK dropped those plans on Monday, saying it would be joining the US-led mission instead. On Tuesday, Israeli media reported that the country’s foreign minister had agreed to provide the US-led coalition intelligence and other assistance. Last week, US Vice Admiral Michael Gilday said the US Navy was looking to ensure that “80 or 90 percent” of the work in the maritime security coalition was done by the US’s allies, with the US effort to be focused primarily on “intelligence support.” Iran has repeatedly warned the US and its European allies against any ‘maritime security missions’ in the area, and said that it was prepared to defend its 2,400 km of coastline and to ensure freedom of navigation for others.