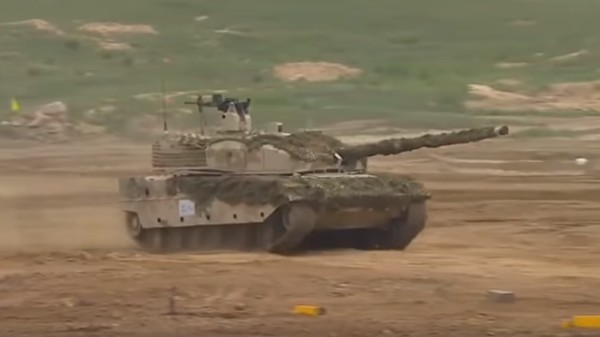 The VT-5, a made-for-export version of the People’s Liberation Army’s new ZTQ-15 light tank, will be equipped with an active protection system that can shoot down incoming projectiles, according to a China Central Television report last week.

The new system will “detect incoming hostile projectiles before firing interception rockets to detonate them before they hit the tank,” the Global Times reported on Sunday, citing the CCTV report.

“The tank is also equipped with a sensor system that sends a warning when the tank is aimed [at] by a laser beam, which can notify the operators to take evasive maneuvers like releasing smoke,” the Global Times noted.

Built by the China North Industries Corporation (Norinco), the VT-5 is a version of the ZTQ-15 light tank intended for export to foreign buyers. The tank is a scaled-down version of the PLA’s VT-4 main battle tank, also called the MBT3000, which is in turn derived from the Soviet Union’s T-72 tank.

"Compared to a heavy main battle tank, a light tank like the VT-5 carries lighter armor, meaning weaker passive protection. Using an active protection system would be a great choice," a military expert who requested anonymity told the Global Times. The tank can also be fitted with special explosive reactive armor that disrupts the penetration ability of shaped charges, or advanced composite armor for deflecting high-energy anti-tank (HEAT) weapons, according to The Diplomat.

The ZTQ-15 is fairly new, only making its debut three years ago at the 2016 Zhuhai Air Show, a common venue for unveiling Beijing’s new weapons of war.

The PLA reportedly intends to purchase 300 ZTQ-15s, which can operate at high altitudes and in rough terrain, such as that found in China’s Tibetan Plateau. The purpose of a light tank design is to go where regular tanks can’t and to get there faster. At only half the weight of the VT-4, the VT-5 is a real speed demon, the Global Times noted.