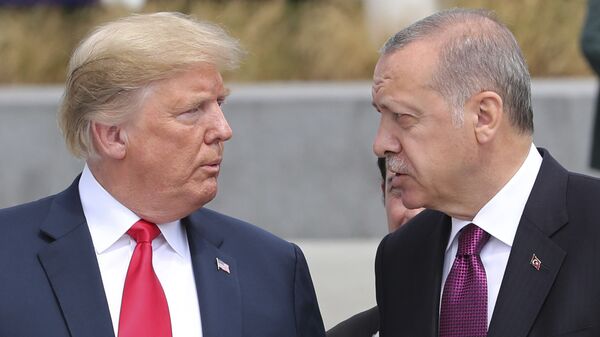 © AP Photo / Presidency Press Service
Subscribe
International
India
Africa
Earlier, US President Donald Trump said that the White House is still “looking at” the possibility of slapping sanctions on Turkey over its purchase of the Russian missile systems S-400, in line with the Countering America’s Adversaries Through Sanctions Act (CAATSA).

Republicans and Democrats in US Congress plan to force President Donald Trump to impose sanctions on Turkey if he fails "to outline soon" the ways to punish Ankara for buying Russia's S-400 air defences, The Washington Post reported.

"We would have to pass a law that wipes out any sort of national security waiver - which we try not to do because we want to give presidents that flexibility. But if it's abused, we'll have to act, I imagine", the newspaper cited Republican Senator Marco Rubio as saying.

He was echoed by Democratic Senator Jeanne Shaheen who called for introducing "tiered sanctions" which stipulate that Turkey will face step-by-step repercussions for implementing the S-400 deal.

Shaheen claimed that it might leave Trump "some ability to continue to negotiate" with Ankara and "encourage them to stay in NATO".

Republican Senator James Lankford, in turn, pointed out that Congress wants to make clear that "the sanctions apply" and that "if another country wants to go out and buy Russian systems, they'll have the same response from the United States".

Republican Lindsey Graham insisted that "the best thing to do for Turkey is hook up our economies, not let the S-400 define the relationship". At the same time, he added that "we're trying to avoid sanctions if we can".

The developments come after Trump told reporters last month that Washington is still considering imposing sanctions on Turkey over the S-400 deal.

The statement followed the White House's announcement that Turkey's acquisition of the Russian S-400 air defence systems had made Ankara's participation in the F-35 fighter jet programme impossible.

The Turkish Foreign Ministry called the move a unilateral step that might bring irreparable damage to bilateral relations.

Turkey's President Recep Tayyip Erdogan, for his part, underscored that "there is no evidence that the S-400s will somehow cause harm to NATO or the F-35", expressing hope that Trump would not allow Turkish-US relations to "become a captive of" the S-400 issue.

The Countering America's Adversaries Through Sanctions Act (CAATSA) envisages that the Trump administration can implement at least five out of 12 designated measures against Turkey, which include sanctions on export licenses, arms, financial institutions and loans from US banks.