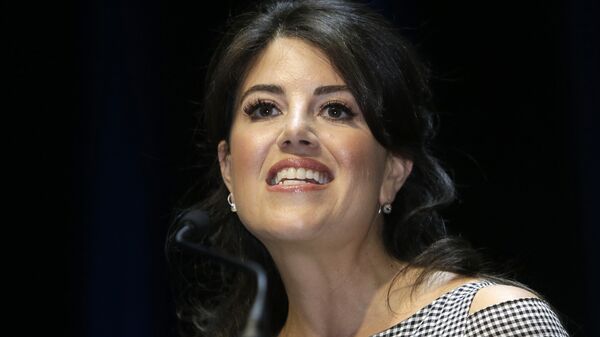 © AP Photo / Lionel Cironneau
Subscribe
When US Vice President Mike Pence, a known Christian fundamentalist, gave some ambiguous advice earlier this week, former White House intern Monica Lewinsky was right there to clap back in the best way possible: with a sex joke.

Pence, whose political career is dotted with anti-gay legislation and beliefs and who is afraid to dine alone with a woman other than his wife, recently told the strongly anti-LGBTQ advocacy group Alliance Defending Freedom a bit of questionable advice that his wife, Karen, gives to her students.

“Spend more time on your knees than on the internet,” Mike Pence says, apparently blissfully unaware of the sexual implications of the statement.

Naturally, with a guy this uptight, any chance given to critics to get egg on his face is going to be not merely seized, but thoroughly enjoyed. Twitter did not disappoint.

​“OK, who’s gonna tell him?” asked author and former Vogue writer Lauren Duca, sharing a story with the quote in it.

“Def not me,” replied Lewinsky, who was once at the center of a scandal involving “sexual relations” with then-US President Bill Clinton, including one such oral action typically perfomed on the knees.

At first, Twitterers were in awe at what they had just witnessed.

​Eventually, folks just had to hand it to her:

​Of course, veteran netizens haven’t forgotten how Lewinsky has used her claim to fame to score internet points before. She has also advised organizational psychologist Adam Grant, on a post asking for the worst career advice people had ever received, that assurances that “an internship at the White House will be amazing on your resume” did not pan out very well for her.

You're one of the only things that is good about social media.