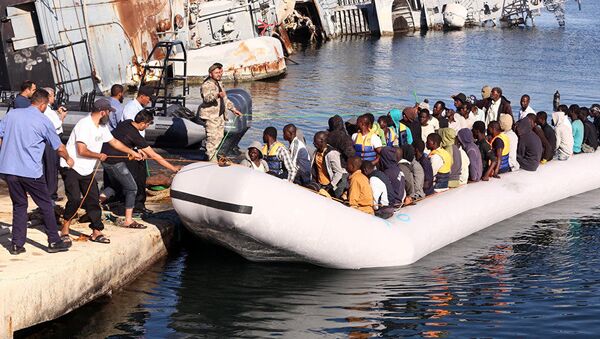 © AFP 2021 / Mahmud Turkia
Subscribe
To reach Europe, migrants from sub-Saharan Africa often fall victim to traffickers or the war between Tripoli and Benghazi. On 2 August, Libyan Interior Minister Fathi Bashagha announced the closure of three centres for migrants after a missile strike by Marshal Khalifa Haftar's troops (as claimed by the Tripoli authorities).

Casualties of traffickers in the Mediterranean often fall victim to the open war between Tripoli and Benghazi. Sub-Saharan migrants end up trapped in Libya.

Sputnik correspondent Christine H. Gueye visited the only illegal migrant centre in Benghazi, financed by the provisional government not recognised by the international community.

Bombed in early July, the Tajoura Migrant Detention Centre will be closed. Two other centres, one located in Misrata and the other in Khoms, near skirmishes between rival factions in West and Central Libya, will be closed as well. The three camps are under the auspices of the UN-recognized Tripoli National Union (GNA) government led by Fayez el-Sarraj.

The decision was announced on Friday, 2 August, by Libyan Interior Minister Fathi Bashagha, following a 2 July missile strike, allegedly by the forces of Marshal Khalifa Haftar, the strongman of Libya who is not recognized by the international community.

​Libya: 3 migrant reception centres will be closed soon. The government claims that it's no longer able to bear the material costs associated with receiving migrants. At the same time, new groups of migrants have appeared in Homs.

Following the 4 April offensive on Tripoli, Marshal Haftar's ANL announced its imminent entry into the Libyan capital to "liberate Tripoli from the militias that govern it," but has not yet reached it. Thus, the partition of Libya continues, a sizeable oil-rich country plunged into chaos since the fall of Muammar Gaddafi and his assassination in 2011.

For most observers, the risk of civil war has never been stronger in Libya, and the issue of migrants suddenly appeared in a new light since they could now be used as bargaining chips to ensure support from the West, or as pressure to discredit the adversary.

Ghassan Salamé, the UN representative in Libya, and UN High Commissioner for Human Rights Michelle Bachelet consider the attacks on the Tajoura centre, which killed some 50 migrants, a "war crime". Especially since the exact GPS coordinates of the centre, and those of other migrant detention centres, have long been reported to the belligerents to avoid any blunders.

But the UN Security Council failed to condemn the attack after the United States refused to support a joint statement proposed by Britain to demand an immediate cease-fire. According to diplomatic sources, it was rejected by Donald Trump. The US President has never hidden his support for Marshal Haftar, saying he is "more committed to the fight against terrorism."

After CNN reported that Sub-Saharan migrants were being sold as slaves with the knowledge of the Libyan authorities in November 2017, the GNA has regularly been singled out. The government in Tripoli receives subsidies from Europe to take care of these migrants in their respective centres until they are sent home if they arrived illegally.

Several NGO reports, notably Amnesty, have described "violence by traffickers, criminal gangs or armed groups" against migrants when they manage to cross the Mediterranean from Libya before landing in Italian reception centres. The most depressing for the Tripoli authorities was the video investigation carried out very thoroughly by the New York Times with the help of Forensic Oceanography, an organization created in 2011 to count dead migrants, and Forensic Architecture, a research group investigating human rights violations. For the first time, it was documented that the Libyan coastguards, trained and paid by Europeans, completely ignore the human rights of these migrants, and refuse to help them as they drown:

"Since the agreement between Libya and Italy reached in February 2017, entrusting the Libyan authorities with the task of intercepting migrants in their territorial waters, it has become very challenging for NGOs to send rescue vessels to the Mediterranean Sea. They are constantly threatened by Libyan coast guard services, which, despite European subsidies and the training they receive, don't save migrants from drowning. Thus, by turning a blind eye to Libya's violations which are constantly detected by NGOs, Europe exacerbates the situation and pushes migrants towards death," warn the authors of the video investigation published in 2019, but documenting events from 6 November 2017.

At the end of July, another 150 migrants drowned after leaving Libya for Italy. This is the "greatest loss of life in the Mediterranean recorded in 2019," according to the United Nations. That is why the closure of the three main migrant reception centres in Tripolitaine could lead to "overcrowding of the remaining centres" or, worse, to "these migrants falling into the hands of traffickers," Libyan experts say.

Women with children from Sudan waiting in Ganfouda detention centre in Benghazi to know if they will be able to stay in Libya or if they will be forced to return to their country of origin
© Photo : holzbauermadis

The current situation will only aggravate the already unenviable fate of these sub-Saharans in Libya. Emmanuel Macron expressed concern about this at a press conference on 22 July, even before statements by the Minister of the Interior of the Tripoli Government:

Despite threats from the Italian and Libyan coastguards, European NGOs seeking to save migrants from drowning are determined to continue their crusade. After a stop in Marseille, the Ocean Viking of SOS Méditerranée "will leave this week for the international waters off the Libyan coast, where it should arrive in about three days," according to a statement released by the organizers this weekend.

For two months, the ship was set up in a shipyard in Poland to receive the survivors in the best conditions, despite threats:

"The Ocean Viking is ready to fulfil its mission. Following the recent tragic events in the Mediterranean, we are determined to reach the rescue zone as soon as possible. More than 110 people went missing after a shipwreck on Thursday, 25 July, off the Libyan coast, "the worst tragedy in the Mediterranean this year," according to the UN. We are sending a new ship to rescue those in distress. This is a ship from all Europeans, showing solidarity and humanity," the NGO SOS Méditerranée emphasized in a statement dated 4 August, a copy of which Sputnik has managed to obtain.

What is the Situation in Eastern Libya?

In Benghazi, where there is only one migrant reception centre, with a capacity of 500 people, the situation at the Ganfouda camp, which Sputnik France special envoy was able to visit on 10 July, is not much different from Italy's refugee reception centres in terms of hygiene.

"Here, migrants eat their fill, drink filtered water, have access to washing machines and entertainment activities, and, most importantly, their rights are respected here. Migrants have a normal life here; we carry out primarily a humanitarian mission. They have three meals a day. In the afternoon, they play football. We have divided them into teams. Just before dinner, they watch TV to learn what is happening in the world. After 9 pm, they go to bed. We don't expel anyone, but some leave the camp voluntarily. If a refugee refuses to return to their homeland, we make them aware of the risks of ending up in prison etc. This is a preventative measure; we are not expelling anyone," Ismail Khaled Dressi, deputy director of the illegal immigration section in Benghazi, said.

Fully financed by the Provisional Government of Eastern Libya, which is not recognized by Western countries, the camp has enough funds to provide three meals a day to 490 migrants of different nationalities, including Chadians, 108 Sudanese, including 58 children and 47 women. The Ministry of Foreign Affairs and International Cooperation of the Interim Government and the International Organization for Migration (l' Organization Internationale des Migrants (OIM) provide hygiene products and toiletries.

"There is a hairdresser's funded by the Ministry of Foreign Affairs where migrants can have their hair cut and combed. Every Friday, after prayers, according to Libyan tradition, they get couscous with meat, fruits and drinks," Ismail Khaled Dressi said.

His colleague, Major Hamed Said El Qefifi, Head of the reception and exclusion department, distinguishes between the detention of migrants who have IDs and illegal migrants (those without any documents). In this case, after having undergone a mandatory physical examination, they are either released or sent to their country of origin.

"Special services police at the Ministry of Interior of the Libyan Provisional Government should ensure the security of the country and the citizens. When it comes to illegal migrants, we have the right to protect ourselves, like all other countries! If nothing is wrong with a migrant's papers, they can come here [to Benghazi] and feel great here. The Libyan people are hospitable and welcome everyone "regardless of colour or social status," Hamed Said El Qefifi said. 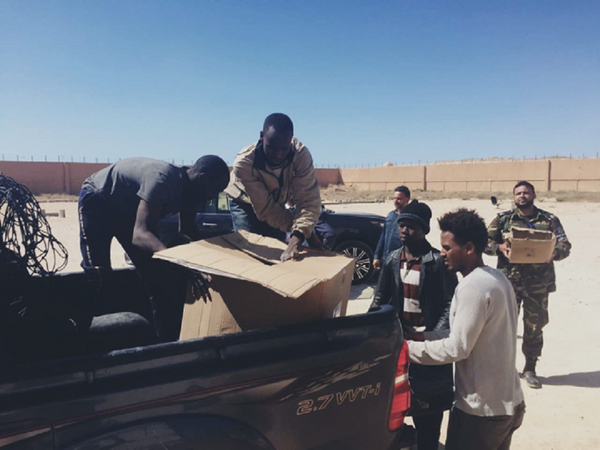 At the moment, the interim government in eastern Libya is trying not to send "their" migrants to Tripoli, from where they can be expelled. Migrants who are identified as illegal are transported to neighbouring countries, such as Sudan, Egypt or Chad, with the help of compatriots or through a checkpoint in Imssaad," he explained.

"Problems sometimes arise with more distant countries, where the situation is unstable, for example, with Somalia. In such cases, we work with the International Organization for Migration, which carries out the evictions. Evictions are voluntary, agreed to by the migrant. If necessary, the International Organization for Migration contacts compatriots of the migrant. Migrants are deported from Benina Airport, either directly or after transit to Turkey for example. But they will never be transported from Benghazi to Tripoli!" a camp leader said.

He clarified that sometimes "they expel up to 80 Chadians and Sudanese per day" and no more than "5-10 representatives of other nationalities per month."

In the camp, the Sputnik correspondent was able to talk to migrants: they are all happy that they ended up in a Benghazi camp and, despite scrupulous control, legal migrants said they would like to stay in Benghazi and work there.

Even those who had great difficulty getting here or have been victims of illegal smugglers, who took their money and documents, don't give up on their hopes to cross the Mediterranean Sea. But only when they "have improved their health" or gotten refugee status by applying to the UN authorities," say migrants.

Meanwhile, the southern Sudanese or Congolese are doing all kinds of work in the kitchen or providing small services to the guards. If they had to leave the camp, they wouldn't go to Tripoli, even if promised a chance to cross the sea, because, they say, the situation in Tripolitania has become "too complicated" for sub-Saharans.

To view the entire report made in Ganfouda camp in Benghazi, click on this link: