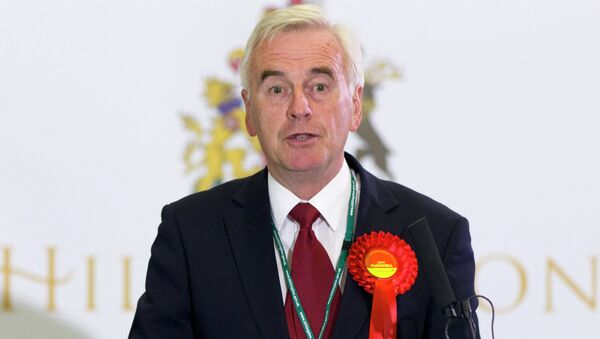 Jason Dunn
All materialsWrite to the author
John McDonnell, the Shadow Chancellor for the opposition Labour Party, has a history taking a radical stance on key issues: from his opposition to the Iraq war, austerity, to being an advocate of Marxism and Irish reunification.

Scores of people turned out to see the potential next chancellor of the exchequer John McDonnell as he took an early stage at the Edinburgh Fringe Festival's "In conversation With..." event.

The crowd gathered outside of the New Town Theatre from 11am to 12 GMT waiting to see the MP.

The Labour Shadow Chancellor spoke at the festival on both Tuesday and Wednesday, speaking to Iain Dale and Graham Spiers respectively, reiterating that he would refuse to go into coalition with the Scottish National Party (SNP) to "block the Tories" out of power.

When asked how he would secure a general election, he explained that Boris Johnson would be unable to govern effectively without a majority in parliament.

Labour should win a vote of no confidence in the government due to the collapse of Tory majority, with Labour forming a "caretaker government" supported by opposition parties and defected Conservative MPs disillusioned by UK prime minister Boris Johnson's government, McDonnell added.

He explained that two weeks are given for the largest party to attempt to secure a majority in parliament for a government.

While adding the caveat of not wanting “to drag the Queen into this," he went on to say that if the Conservative government were to refuse to stand aside he would be sending "Jeremy Corbyn in a cab to Buckingham Palace to say ‘we’re taking over’.”

He ruled out formal coalitions with other opposition parties such as the SNP and the Liberal Democrats to form a government of national unity, who themselves ruled out a coalition with Corbyn's Labour Party following the ascension of Jo Swinson to the leadership last month.

"We're a socialist party; they are not" he told the audience.

He added: "My own view - I think they're Tories, it's as simple as that, and I always have thought that."

He did give one guarantee to the other opposition parties to prevent a no-deal Brexit and put the final say on the issue "back to the people."

However, when asked about a second Scottish independence referendum, he said that it would be "up to the Scottish people and the Scottish parliament."

He underscored that he would not be "set up" by Nicola Sturgeon and play into her "trite" political game and doubled-down on his determination to seek a Labour Majority in parliament through a general election.

"She's trying to say it's the big bad English yet again trying to prevent us holding a referendum," he said.

He added: "We would not block something like that. We would let the Scottish people decide. That's democracy. There are other views within the party but that's our view."

The Shadow Chancellor clarified that he opposes another Scottish referendum and prefers the opportunity to "demonstrate as a Labour government what we can do to transform people's lives."

"And if, after a few years, people want to come back and say they want to test the water on an independence referendum then fair enough, that's up to the Scottish people and the Scottish Parliament."

The remarks hinting at the potential for a second referendum follow a poll on Monday indicating that 52% of Scots would vote for independence, in opposition to Labour's Scotland policy.

Spiers asked McDonnell about the issue of Marxism, to which he replied, saying that Labour represents a broad history of "English socialism" of which "Marxism is a part."

When asked about previous comments where McDonnell had said "Look, I'm straight, I'm honest with people: I'm a Marxist," he explained that the comment was made in the context of Marx having predicted the financial crash.