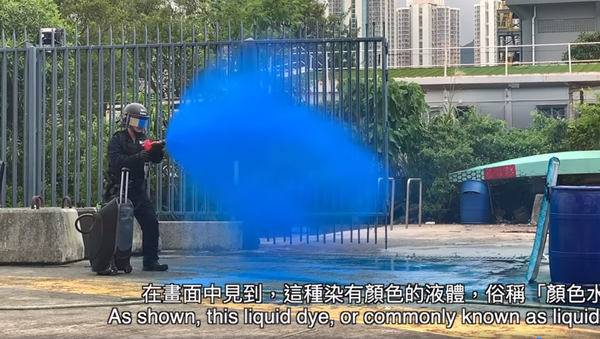 As clashes between Hong Kong police officers and protesters escalate, authorities recently announced they would be utilizing a new tagging tactic that stains skin and clothes, making it easier for authorities to identify law-breaking demonstrators.

In a video posted to Facebook Sunday, Hong Kong Police Force Superintendent Louis Lau Stu-Pong informed the public that area police now have a “portable spraying device” that dispenses a dye or “liquid color” to help them distinguish problematic protesters from the normal public.

Police hope the substance will aid efforts in identifying threatening protesters, particularly those who conceal their identities with gas masks and other headgear.

Though the dye itself is edible and virtually harmless, the announcement revealed that police reserve the right to add the liquid color to their tear gas spray if they deem it necessary. Officers have allegedly been trained to identify when to use the dye.

Without naming names in the video, the superintendent noted that China is not the first country to adopt the tagging practice.

Demonstrations have been going on in Hong Kong since June 9 as a response to the anticipated adoption of an extradition law that would allow suspects in the autonomous city to be tried in mainland Chinese courts.

Many opposed believe that the law can be used by the Chinese government to extradite suspects for political reasons.

The government has since suspended the legislation, and Hong Kong Chief Executive Carrie Lam issued a “very sincere apology” back in June, but protesters have been calling for the bill to be completely withdrawn.

A series of peaceful peaceful demonstrations kicked off on Friday in the Tai Kok Tsui’s western Kowloon district, but have recently turned violent as a number of demonstrators have hurled everything from petrol bombs to glass bottles, according to police.

Hong Kong police most recently used tear gas on Tuesday to break up a crowd of demonstrators that allegedly broke off from the main rally, headed south and proceeded to throw bricks and eggs at the Tsim Sha Tsui police station. Rubber bullets and water hoses have also been used by police.

Sputnik reported at least 82 demonstrators were detained during Monday clashes alone. Over 500 have been arrested since June 9, Senior Superintendent Kong Wing-Cheung said earlier this week at a press briefing, adding that at least 139 Hong Kong police officers have been injured.