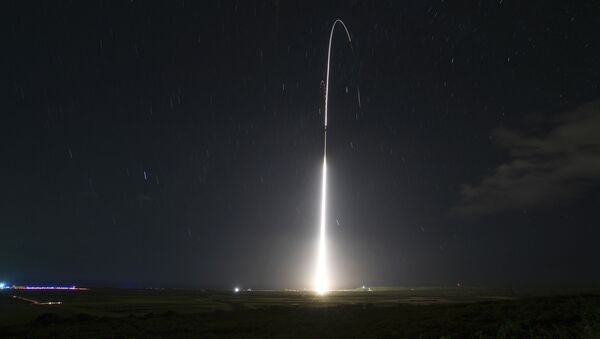 Pyongyang said in a Wednesday statement that its missile test the day prior was meant as a message to the US and South Korea to cease their military exercises that began earlier this week.

Tuesday's test of two short-range ballistic missiles was "an occasion to send an adequate warning to the joint military drill now underway by the US and south Korean authorities," North Korean state-owned Korea Central News Agency said Wednesday, echoing a sentiment expressed multiple times over the past few weeks in conjunction with weapons tests.

"Two tactical guided missiles launched at the operational airfield in the western area of the country flew across the sky over the capital area and the central inland region of the country to precisely hit the targeted islet in the East Sea," the statement noted. The test was just the latest in a flurry of firings of a new weapons system into the Sea of Japan.

While Pyongyang hasn't formally identified the weapon, describing it as a “newly-developed large-caliber multiple launch guided rocket system," analysts in South Korea and the US have concluded the weapon is most likely the KN-23, a mobile ballistic missile system first seen in a 2018 parade but likely only fired for the first time this past May.

While Washington and Seoul have scaled back their physical military drills that rehearsed attacks on the Democratic People's Republic of Korea (DPRK), the exercises presently underway are simulated on a computer, CBS noted. However, even the downsized drills still violate US President Donald Trump's June 2018 agreement with North Korean leader Kim Jong Un.

US officials have confirmed that the North's recent round of weapons tests doesn't violate that agreement, though, since they're short-range conventional weapons.