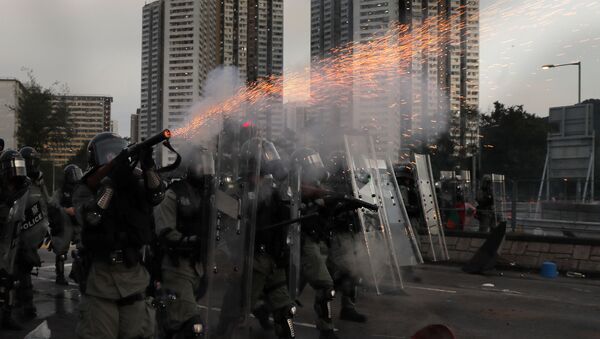 MOSCOW (Sputnik) - Hong Kong police fired tear gas to disperse a crowd of protesters who besieged a police station over the arrest of a student union leader, local media reported on Tuesday.

Earlier in the day, Keith Fong, the leader of the Baptist University student union, was arrested over suspicion of possessing weapons as police found ten laser pointers on him.

More than a hundred people encircled the Sham Shui Po police station to demand his release, and police fired several rounds of tear gas to disperse them, the RTHK broadcaster reported.

A rally also swept Hong Kong on Monday as thousands of protesters almost completely blocked the city's traffic and engaged in violent clashes with law enforcement. Police had to use tear gas and rubber bullets to disperse demonstrators. As many as 148 people were detained on charges of unlawful assembly, riot, assault of police officers and possession of weapons.