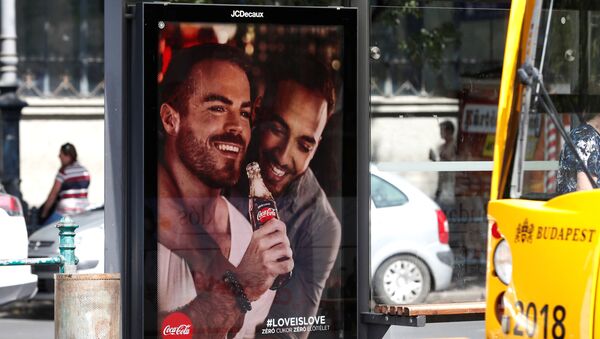 © REUTERS / BERNADETT SZABO
Subscribe
Egor Efimchik
All materials
Posters promoting LGBTQI tolerance have popped up in Budapest ahead of a progressive week-long music and arts festival, but online petitioners and a lawmaker from the ruling party were not happy with Coca-Cola’s outreach marketing efforts.

Coca-Cola has sparked calls for a boycott in Hungary after running an advertising campaign that 'promotes' LGBTQ relations.

The company's Hungarian branch launched the "Love is Love" campaign ahead of the progressive, multicultural Sziget festival, which kicks off in Budapest on Wednesday under the motto "Love Revolution".

Deputy speaker Istvan Boldog said in a Facebook post that he would stop buying Coca-Cola products until the company removes the ads, and urged others to follow suit.

Fides, however, stopped short of supporting Boldog, saying in a brief statement that it is up to individuals to decide whether or not to drink Coke.

“The Coca-Cola Company strives for diversity, inclusion and equality in our business, and we support these rights in society as well,” stated a company spokesperson. “As a long-standing supporter of the LGBTQI community, we believe everyone has the right to love the person they choose. The campaign currently running in Hungary reflects these values.”

An online petition was launched last week, calling on the mayor of Budapest and transport authorities to remove Coca-Cola posters with LGBTQI couples from public places.

“Such advertisements are already common in Western Europe. In our country, we can still stop the process,” reads the petition, which has racked up over 32,000 signatures.

“Until now, large companies in Hungary have not advertised with openly gay content and messages. Have no illusions- this is a test. If Hungarian society accepts this, there will be more and more steps. Posters, commercials, films, rainbow products, etc. And as we continue to slide down the slope, it will become increasingly difficult to stop.”

Homosexuality is legal in Hungary for both men and women, but same-sex marriages are not, although the country does recognise same-sex civil partnerships.

The ruling Fidesz party and its leader, Prime Minister Viktor Orban, advocate Christian values, including a traditional family, and oppose the legalisation of same-sex marriage. Orban, under whose premiership Hungary emerged as a conservative European stronghold, earlier defined marriage as a union between a man and a woman, insisting that “homosexuals can do whatever they want, but they cannot enter into a marriage recognised by the state”.

000000
Popular comments
More western perversion promoted to otherwise traditionally Christian nations. If you do not like it, do your research and boycott all american products at a personal and household level.