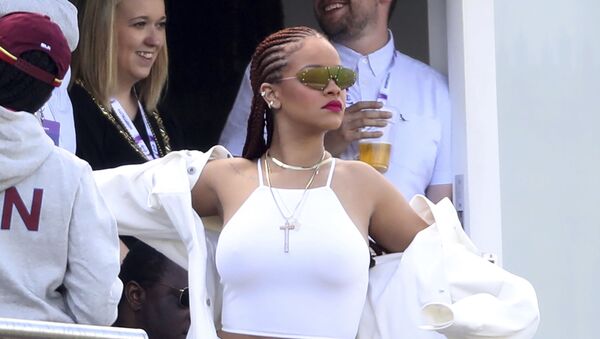 © AP Photo / Owen Humphreys
Subscribe
Donald Trump is backing a bipartisan effort to tighten background checks for gun users, which he says could be paired with a long-promised overhaul of the immigration system.

Rihanna has waded into the US gun control debate, calling out President Trump over his comments following the recent mass shootings.

Donald Trump has blamed the attacks on “cowardice” and “mental illness”, but the pop star said he mislabelled the perpetrators.

“Um... Donald, you spelt “terrorism” wrong!” she wrote in posts that went viral on both Twitter and Instagram.

“Your country had 2 terrorist attacks back to back, hours apart leaving almost 30 innocent people dead. This, just days after yet another terrorist attack in California, where a terrorist was able to LEGALLY purchase an assault rifle (AK-47) in Vegas, then drive hours to a food festival in Cali leaving 6 more people dead including a young infant baby boy!”

Her sentiment appeared to have resonated well with many commenters.

“We need you as President....better yet, we need a FENTY DICTATORSHIP,” one use wrote, referring to the singer's birth name, Robyn Rihanna Fenty.

EAT HIM UP ACROSS PLATFORMS PRESIDENT FENTY

Keep your foot on his neck and APPLY PRESSURE

In less than 24 hours on Saturday and Sunday, two mass shootings in El Paso, Texas and Dayton, Ohio left at least 29 people dead and dozens of others wounded. In both cases, the suspects were said to have used legally-purchased semi-automatic rifles.

Less than a week earlier, four people, including the gunman and a six-year-old kid, were shot at a California food festival.

These attacks have fuelled a nationwide controversy regarding gun rights. Gun control has been high on the Democratic agenda for quite a while, and several 2020 hopefuls, including Joe Biden, Bernie Sanders, and Elizabeth Warren, took the chance to blast the NRA – the most influential gun rights lobby group in the US – and gun violence.

Following the shootings, Donald Trump said he wanted “strong background checks” for firearms users to be combined with immigration reform, but did not go into further detail.

His administration has already issued a ban on bump-stock modifications, which effectively turn semiautomatic rifles into machine guns, and backed efforts to improve the background-check system.

However, Trump has not attempted a sweeping overhaul of gun laws yet, although last February, he entertained the idea of a “comprehensive” legislation. He has earlier also repealed an Obama-era gun regulation that made it harder for certain individuals with mental health conditions to buy firearms.