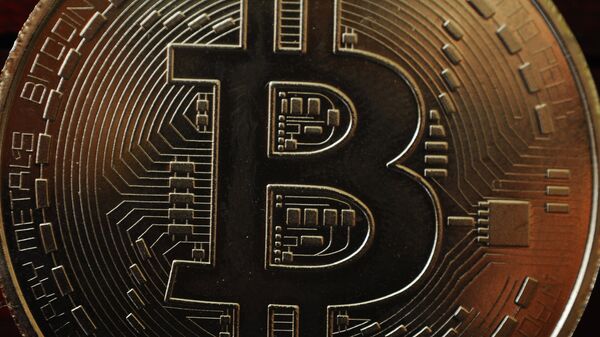 © Sputnik / Aleksey Sukhorukov
/
Go to the photo bank
Subscribe
The world's leading cryptocurrency, Bitcoin, has climbed above $11,120 to its highest level since 12 July, according to data provided by the Bitstamp bitcoin exchange.

Nafis Alam, Associate Professor of Finance at the University of Reading Malaysia, reflects on what it means for the entire sector of cryptocurrencies and the global economy in general.

Sputnik: Bitcoin climbed past the $11,000 level for the first time since mid-July to lead gains among the biggest cryptocurrencies. How significant is this and what do these gains mean for Bitcoin and cryptocurrencies?

Nafis: I believe that Bitcoin is going through a roller coaster ride - it's going through ups and downs. If you look at July itself, it went down to 9000 and came back at 12,000. It has a lot to do with macroeconomic factors, in fact, more to do with the political unrest; what's happening in Hong Kong, for example, what's happening in the UK with Brexit coming up, as well as the trade war between the US and China. The new speculation coming up with the new tariffs being imposed after 4th September causing the capital movement out of China and whenever there is movement out from the financial market, it all goes towards the Bitcoin and crypto.

Sputnik: What effect is the ongoing trade war between China and the US having on the value of Bitcoin and other cryptos both in the American and Asian markets?

Nafis: It's very difficult to have a direct relationship to look into that but definitely what's happening here are that the markets are not doing well. The Chinese yuan has devalued and it has been having an impact on most of the Asian currencies. The moment you have a devaluation in the currency, people are looking for safe havens and gold has definitely been a safe haven for a long time but with the emergence of cryptos, they represent an easy buy for people to try to move and diversify the investment from the financial markets in all the currencies into the Bitcoin which is giving it a surge. Whenever you see that there is a trade war speculation that's happened toward the beginning of the year and the second quarter of the year, whenever the trade war has been intensified, Bitcoin is gaining growth out of it. China has been always the key market for the Bitcoin valuation. If the Chinese economy is not doing well if China's currency is falling down, only the market can predict that China will further suffer because due to the trade war people start to diversify their investments into the Bitcoin.

Sputnik: After it was announced that the launch of Facebook's crypto 'Libra' was being pushed back to 2021; what challenges does Bitcoin face?

Nafis: I've always been a critic of the Bitcoin and because if you look recently, even the FCA has warned potential investors that Bitcoin and cryptocurrencies have no intrinsic value. There has been a lot of speculation but it's not being regarded as a proper monetary payment system. So there is a lot of speculative activity rather than having support from the regulator. Even if you look into illegal transactions, a lot of things happening between Russia and China, it has been reported that a lot of money is crossing the Russia China border and most of the dealings are done via crypto. So that's part of crypto, it's still going to have a negative impact. Facebook's Libra does have an impact on the valuation because now the regulators are closely monitoring it because Facebook and some other big tech giants are also looking at launching their own stable of coins like JP Morgan and so on. That will help to push the regulation whilst at the same time Bitcoin needs come out of its negative sense of (being used for) illegal transaction or money laundering. (Otherwise) it's not going to get the same impact from the financial players. It will be more (focused) on darknet activity as well as in the illegal transactions.