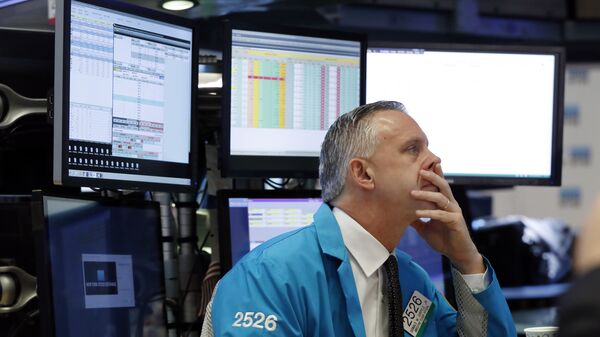 The Dow Jones Industrial Average fell by more than 700 points on Monday as a result of China allowing the yuan’s exchange rate to fall to an 11-year low of seven to one against the US dollar.

The plummeting figures come hours after the yuan finished at a value of 7.0392 on Monday, a move which was quickly slammed by US President Donald Trump as a “major violation” and “currency manipulation.”

​“The President is playing a very risky game here,” Robert Pavlik, chief investment strategist and senior portfolio manager at Slatestone Wealth Llc in New York, told Reuters. “The Chinese yuan weakening the way it has and with interest rates tanking, I think the possibility of a recession has been pushed up.”

Adding fuel to the fiery trade day, China’s Commerce Ministry announced earlier in the day that Chinese companies have stopped purchasing American agricultural goods, and that Beijing hasn’t yet ruled out the possibility of imposing import tariffs on US farm products that were bought after August 3.

The ministry’s remarks come on the heels of reports that Beijing was asking state-owned enterprises to suspend US agricultural imports.

“Now we have a trade situation that is going off the rails as the side effects multiply due to the ramping up of the use of tariffs, and we are only further apart from any resolution with the Chinese,” Peter Boockvar, chief investment officer at Bleakley Advisory Group, told CNBC.

“The policy of using tariffs as a tool to address our legitimate beefs with the Chinese has failed miserably.”

The latest developments come days after Trump announced last week that the US would be slapping additional 10% tariffs on some $300 billion worth of Chinese goods. As a result of Trump’s August 1 announcement and the US Federal Reserve’s move to cut interest rates, Wall Street has found itself repeatedly closing close to or past the 300-point mark in the red.