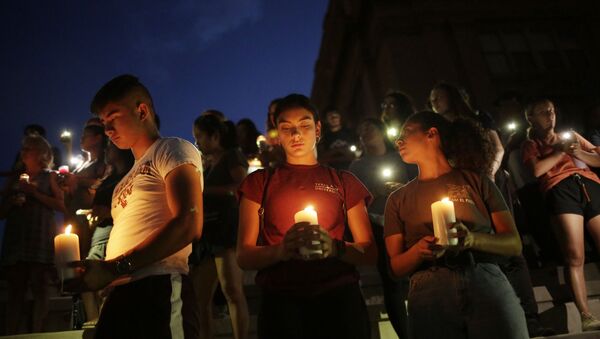 © REUTERS / JOSE LUIS GONZALEZ
Subscribe
The US has been rocked by a series of shootings this weekend in Ohio, Texas, and Illinois. 20 people died when a gunman opened fire in a Walmart near the Cielo Vista Mall in the city of El Paso, Texas. Hours later, nine died in a shooting in the city of Dayton, Ohio. Two shootings were also reported in Chicago, where nine people were injured.

Lacey Wallace, an assistant professor of criminal justice at Penn State Altoona, does not rule out that the increased number of shootings could be a result of a copycat effect that occurs when a major mass shooting is well-publicised.

Sputnik: The shooting in Dayton occurred just a few hours after the one in El Paso. What can you say about the Dayton incident? Why is there yet another tragic incident in less than 24 hours?

Lacey Wallace: To my knowledge, these shootings were completely unrelated. The perpetrators were unknown to each other. However, research has shown that there can be a copycat effect following a major mass shooting, if it is well-publicised. There is increased likelihood of another shooting occurring in the two weeks following highly-publicised events. For some would-be shooters, the lure of media attention and notoriety can be a trigger.

Sputnik: According to reports, the shooter in El Paso purportedly posted a manifesto ahead of the shooting spree, declaring that his act was motivated by his fear of increasingly large numbers in the Hispanic population due to illegal immigration. What are the possible reasons behind such rhetoric? How much of an influence do these migration flows have on society?

Lacey Wallace: Anti-immigration attitudes are a growing concern in the US. According to a recent report by the Pew Research Centre (July 17, 2019), almost two-thirds of Americans still see being open to immigration/foreigners as part of who we are as a nation. However, this is a 6% decrease since just September 2018. Only 37% of Republicans today see openness to foreigners as key to national identity. There is also a lot of variation by demographics. Males, those with lower levels of education, older adults, and Whites are less likely to see openness to foreigners as part of our national identity. Many anti-immigration views are not based in fact. For instance, some fear having their jobs compromised by those coming into the country illegally to work. However, this does not seem to be a credible threat. Ignorance and politics can contribute to the spread of these incorrect views. 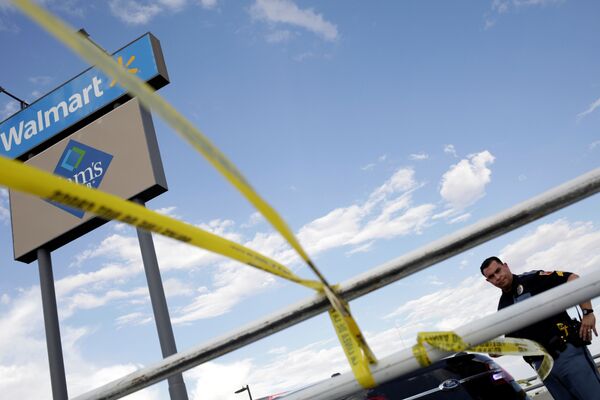 A police officer stands next to a police cordon after a mass shooting at a Walmart in El Paso,Texas, U.S. August 3, 2019. REUTERS/Jose Luis Gonzalez
© REUTERS / JOSE LUIS GONZALEZ

Sputnik: Does this mean that the current crisis at the southern border increases the tensions inside the community? What can be done to tackle such incidents, in your view?

Lacey Wallace: Immigration is certainly a trigger topic in today's political environment, especially since views differ so sharply between Democrats and Republicans. Democrat views of immigration/openness to foreigners have not really changed since 2018, while Republican views have become more negative towards immigration and foreigners more generally. Unfortunately, fear can be a unifying factor. By capitalising on public fears, politicians can energise and motivate base voters.

Sputnik: According to media reports, the claims of the El Paso shooter echo a manifesto posted online by an Australian gunman who in March killed 50 people in the city of Christchurch. What is this new pattern in shooting incidents?

Lacey Wallace: This may be due, in part, to the copycat effect I mentioned above. Well-publicised accounts of other mass shootings can serve as a trigger for some would-be shooters. They can also, unfortunately, set a baseline for what a would-be shooter must do to achieve notoriety. If another shooter killed 10 victims, for example, a would-be shooter might feel that he or she must do more. If another shooter posts a manifesto, others might feel compelled to do the same. A manifesto, however, does not mean that a shooter is tied to any particular group or even other members of a group. Sometimes, a shooter will latch onto the idea of a movement or group but not have any direct ties. A posted manifesto is also a way for a shooter to express their views in a way that does not require direct interaction with other people.

Sputnik: The latest shootings, including today’s shooting, the recent Gilroy Garlic Festival tragedy, and Christchurch were done by pretty young people. What are the main triggers for such behaviour, in your opinion?

Lacey Wallace: Each shooting is unique, so it's hard to say [whether] there are any clear patterns in why individuals take part in mass shootings. Mental health is often described as a contributing factor. This has prompted several US states to pass laws allowing law enforcement to confiscate guns from those believed to be in mental health crisis. However, most mentally ill individuals are non-violent. There is substantial stigma against the mentally ill in the US. Widespread availability of guns is another possible factor. The US has the highest gun ownership rate per capita in the world. Many shooters either purchase guns legally or obtain them from friends, family, or people they know.

Sputnik: Democratic presidential candidate Beto O'Rourke said that President Trump bore some responsibility for the shooting in El Paso, Texas. Why are the politicians capitalising on these tragic incidents to increase their political popularity?

Lacey Wallace: Like I mentioned above, fear can unite. For that reason, it can be a strong starting point for a politician hoping to get attention and motivate voters. In the US, a politician will not win an election by having the appearance of being soft on crime. That remains the case even though most US adults favour rehabilitation for many types of criminal offenders. Stoking fears also plays on the psychological concept of in-group and out-group. We're naturally biased towards people who are like ourselves. Describing and portraying a group, like immigrants, as some sort of dangerous "other" capitalises on that tendency. By rallying voters against a common enemy, a politician can gain voter support and cohesion among voters.

Views and opinions, expressed in the article are those of Lacey Wallace and do not necessarily reflect those of Sputnik.