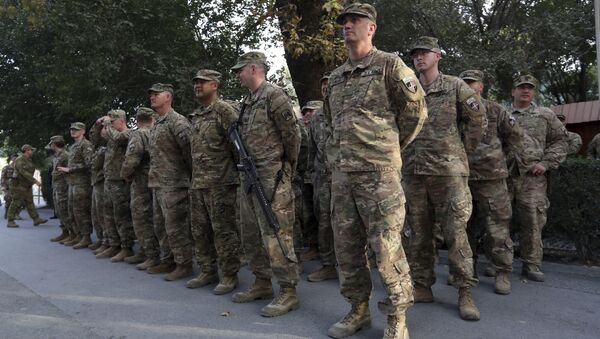 KABUL (Sputnik) - There have been minor issues on the timeline of the US troops' withdrawal from Afghanistan during the eighth round of US-Taliban* talks, a source close to the Taliban movement stated.

"The talks are focused on the timeline of [US troops withdrawal from Afghanistan], there are minor issues but there has been significant progress... The US has agreed to withdraw the entire troops, contractors, advisers and trainers based on the timeline, the NATO will end its mission", the source said.

The timeline of the US troops' withdrawal has been the core demand of the Taliban for the start of intra-Afghan negotiations. According to the source, the withdrawal may take a year to complete.

"Initially, the Taliban were emphasizing on withdrawal in less than a year but now possibly the withdrawal will be completed either in nine months or a year", the source added.

According to the source, the Taliban movement would not retreat from the demands it set ahead of the talks with the US officials.

"The biggest demand of Taliban in intra-Afghan negotiations is the establishment of an Islamic government in Afghanistan, a new constitution for the country and a policy for the Afghanistan that will be the main issues discussed and the Taliban are not going retreat from [them]. The ceasefire will be announced after intra-Afghan gatherings agreed on the Taliban’s core demands", he added.

The Taliban-US peace deal is reported to be announced in the presence of representatives of the international groups, including the United Nations, European Union, the Organisation of Islamic Cooperation, Russia and China, the source said.

According to Kabul-based political analyst and former Taliban official Wahid Muzhda, the withdrawal of US troops may be completed by 2020, just like US President Donald Trump reportedly ordered.

"As Trump said, the withdrawal will be completed by end of 2020, I think that is the deadline, and the Taliban want the same thing", Muzhda said.

In late July, US Secretary of State Mike Pompeo said that Trump wanted to reduce the number of US troops in Afghanistan before the 2020 presidential election in the United States.

The United States and its allies launched a military operation in Afghanistan in 2001 after the 9/11 attacks, which were staged by the al-Qaeda* terrorist group, backed by then Taliban-led government of Afghanistan.

The Taliban and the United States are trying to reach a peace deal to include the withdrawal of foreign troops from Afghanistan and assurances from the Taliban that the country will not be used as a safe harbour for terrorists.

*Taliban and al-Qaeda are terrorist organisations banned in Russia.