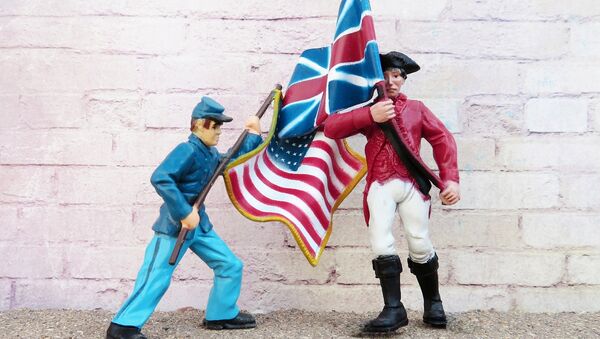 This July the British government revealed plans to introduce a 2% tax starting in April 2020 on the revenues of companies like Amazon, Google and Facebook, making money on UK users. In response, the Trump administration is reportedly ready to ditch an agreement that new Prime Minister Boris Johnson is relying on with a no-deal Brexit looming.

The White House is demanding the UK government drop the so-called digital services tax, threatening London will get no free trade deal, The Telegraph reports, citing its sources. According to the British outlet, “the threat has been communicated to the UK Government ‘at multiple levels’”. Apart from discreet warnings from the Trump administration, key Congressmen have publically signalled they could block negotiations about the free trade deal.

“I met with the UK officials earlier, and said ‘You expect a trade agreement with the United States and the UK It will not happen with your digital services tax. Period. Full stop’”, Wyden stated.

Republican Representative Kevin Brady echoed his statement, noting the tax would impair the free-trade deal negotiations, saying: “It’s not the way to start this discussion”.

As Donald Trump himself stated, he discussed the trade agreement during his first call to congratulate Boris Johnson, who was elected the Conservative Party leader and prime minister this July.

“We’re working already on a trade agreement. And I think it’ll be a very substantial trade agreement, you know we can do with the UK, we can do three to four times, we were actually impeded by their relationship with the European Union”, the US president said.

Boris Johnson earlier insisted that Britain should push for a no-deal Brexit pointing at potential trade deals with countries like the US, as The Independent point out. At the same time, only this July, he endorsed the idea of taxing US tech giants such as Facebook, Google, etc., something first announced by former chancellor Phillip Hammond in 2018.

“I think it’s deeply unfair that high street businesses are paying tax through the nose, whereas the internet giants, the Faangs – Facebook, Amazon, Netflix and Google – are paying virtually nothing. We’ve got to find a way of taxing the internet giants on their income, because at the moment it is simply unfair”, Johnson said then.

The British government published a policy paper on the new digital service tax this July, and will introduce a new 2% tax on the revenues of large multinational enterprises, including search engines, social media platforms and online marketplaces which derive value from UK users starting in April 2020.

It was revealed on the very same day when the French parliament passed a 3 percent digital services tax on multinational tech companies' sales generated in France. The so-called GAFA tax – an acronym for Google, Apple, Facebook, and Amazon – unveiled by French Finance Minister Bruno Le Maire in March 2019 has targeted 30 companies, most of them originating in the US.

In response, Trump slammed President "Macron’s foolishness" and warned it might result in reciprocal steps against his country. He noted: “I’ve always said American wine is better than French wine!”, apparently hinting at what these countermeasures might target.