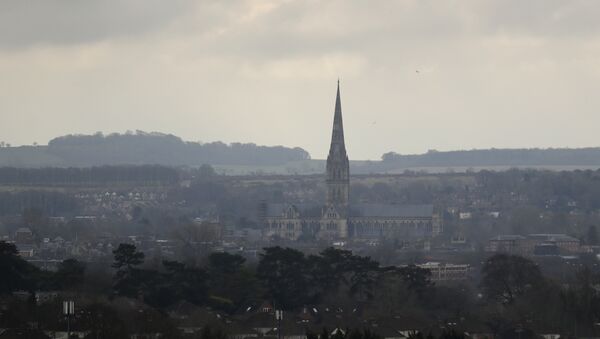 MOSCOW (Sputnik) – The United States has assumed the role of a supreme judge and ignores fundamental principles of the rule of law, such as the presumption of innocence, the Russian embassy in the country said in the wake of Washington’s move to introduce additional sanctions against Moscow over the so-called Skripal case.

"Washington decided to assume the functions of a super-cop and supreme judge with the right to determine who is guilty and impose punitive measures on them … The United States once again showed to the entire world its blatant disregard to fundamental principles of a law state, such as the presumption of innocence and the necessity to bear the burden of proof when making accusations, let alone the need to respect the most basic norms of civilized discourse among nations", the embassy wrote on Facebook late on Friday.

"The goal of such a policy is self-evident – to penalize those, who refuse to submit to Washington’s dictates and defend their own national interests", the diplomatic mission insisted.

The embassy insisted that up until now, Russia has not been shown any proof of its involvement in the poisoning incident in the United Kingdom’s Salisbury, adding that London had been refusing to cooperate with Moscow on the case.

The diplomatic mission insisted that Russia "would not repent and take the blame for what we have nothing to do within the so-called ‘Skripal case’".

The embassy recalled that Russia eliminated its chemical weapons stockpiles back in 2017, which was confirmed by the Organization for the Prohibition of Chemical Weapons (OPCW). It also noted that the United States still had to destroy its chemical weapons arsenal, but it kept shifting the deadline for completing the elimination process.

"Attempts to intimidate us by sanctions are futile and will not pay off. Previous rounds of restrictions have not met their intended goals. Russia is a country with a history that spans more than a thousand years, and has always used the privilege co carry out an independent foreign policy. We are not going to change this tradition today. We will continue to protect a multi-polar democratic world order, based on international law and the principles of the UN Charter. These sanctions games are detrimental to the vital interests of the U.S. itself", the embassy pointed out.

The diplomatic mission also called on Washington to stop its reckless moves leading to the destruction of Russian-US relations.

The first round of sanctions, imposed under the 1991 Chemical and Biological Weapons and Warfare Elimination Act, went into effect on 27 August 2018. Washington claims that Moscow has allegedly violated norms stipulated by the legislation.

On Friday, US President Donald Trump has signed off on the second round of sanctions against Russia over the alleged poisoning of former intelligence officer Sergei Skripal in the United Kingdom in 2018. The sanctions are introduced under the US Chemical and Biological Weapons Control and Warfare Elimination Act.

In March 2018, Skripal and his daughter Yulia were found unconscious on a bench at a shopping centre in Salisbury. London said they had been subject to poisoning with a military-grade nerve agent. London accused Moscow of staging the attack.

However, Moscow has repeatedly noted that London has not provided any evidence proving its role in the poisoning.