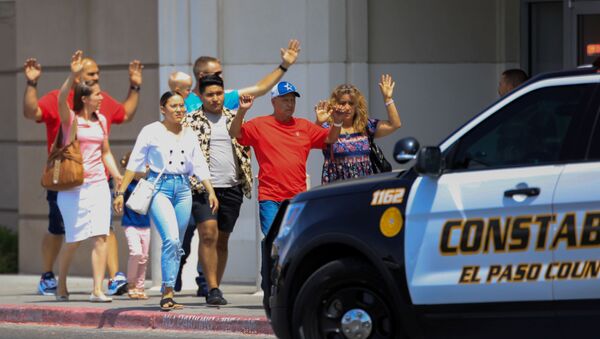 Subscribe
A reported 20 people were shot dead and 26 injured in a gun shooting massacre inside a Walmart in the Cielo Vista Mall in El Paso, Texas, on Saturday. One suspect has been detained after surrendering to police.

Earlier on Saturday, witnesses said, cited by local media, that they heard multiple gunshots, and claimed that there were several people with guns at the Walmart. Social media users posted footage said to be at the scene of the massacre.

This is where the incident is unfolding right now in El Paso, Texas pic.twitter.com/v6XXf5h38Z

At 11:03 am local time (15:03 GMT) El Paso police reported that they had responded to an active shooting near the Cielo Vista Mall and urged people to stay away from the area. Over an hour later, police said the scene was still active and confirmed that they had received reports of multiple shooters.

The Federal Bureau of Investigation in El Paso also confirmed that they had responded to the Walmart gun massacre and were "assisting and coordinating with El Paso police".

A shooter entering a shopping center in El Paso, Texas where multiple people have reportedly been killed. Photo from a security camera obtained by Sputnik #elpasoshooting pic.twitter.com/AUjjVtzAY2

According to the governor of Texas, 20 people have been killed and another 26 injured in the shooting. The incident may be classified as capital murder and a hate crime, El Paso Police Chief Greg Allen said during a news conference.

El Paso, which has about 680,000 residents, is in southwest Texas and sits directly across the border from Juarez, Mexico.

"We are saddened and horrified by the news of the shooting today in El Paso, Texas. A student by the name of Patrick Crusius attended Collin College from fall 2017 through spring 2019", Matkin said in the statement, cited by CNN.

After a massacre at a Walmart store in El Paso, the city of Socorro (about 15 miles southeast of the city) said that its local Walmart was closing to allow its employees to go home.

Update from SPD regarding the Socorro neighborhood Walmart. pic.twitter.com/0BB0c9fB1x

According to CNN report, citing eyewitnesses, a child ran inside "telling there's an active shooter at Walmart". However, no one reportedly took the child seriously because of his age.

House Speaker Nancy Pelosi offered prayers for those affected by the shooting.

“Too many families in too many communities have been forced to endure the daily horror of gun violence. Enough is enough [...] The Republican Senate’s continued inaction dishonors our solemn duty to protect innocent men, women and children and end this epidemic once and for all", Pelosi said in a statement, cited by CNN.

Meanwhile, Senate Minority Leader Chuck Schumer has tweeted that "the situation in El Paso is heartbreaking. We are so grateful to the first responders on the scene. I am praying for the victims, the survivors, and their families. We must act to help end gun violence in America".

“You know that number keeps changing. I hate to pin down a certain number, but I think it was definitely a large number. At least what I’m hearing, the reports between 15 and 20 are probably accurate”, Texas Attorney General Ken Paxton told CNN on Saturday.

According to CNN, Police have not yet given a concrete number on how many victims there were in the shooting.

Now in the beautiful city of El Paso.

Texans grieve today for the people of this wonderful place.

We unite in support of all the victims.

We thank First Responders for their swift action.

We ask God to bind up the wounds of all who’ve been harmed. pic.twitter.com/2l8jDPHbe1

Copied! Paste this code directly into the HTML portion of your site, and you'll be good to go. Need more info? Check out our developer docs.
22:18 GMT 03.08.2019
At Least 9 Victims of El Paso Massacre in Critical Condition

A spokesperson for University Medical Center of El Paso told reporters that 13 people had been delivered to this hospital, according to the KTSM broadcaster. He did not specify their condition. In addition, two children injured in the shooting were admitted to the relevant unit of this hospital.

According to NBC News, citing senior US law enforcement officials, at least 19 people were killed and 40 were injured as a result of the shooting at the shopping centre in El Paso.

El Paso Police official has suggested that most of the victims were shot at a Walmart near the Cielo Vista Mall, AP reported.

Hospitals say they are treating 22 victims of the El Paso shooting, not including at least one who died during treatment, AP reported.

However, local police have asked to avoid the area near Cielo Vista Mall or Wallmart because the officers are still working at the scene.

According to the Police Department no immediate threats are present at the scene anymore.

Still, DO NOT attempt to go to Cielo Vista Mall or Walmart at Hawkins. Law Enforcement is still working at the scene.

The family reunification center is located at 8101 Whitus Dr. pic.twitter.com/zqa4qrtVPv

A University Medical Centre of El Paso said, cited by AP, that one of 12 people who were transported to the hospital after the attack on a shopping complex has died.

Meanwhile, local authorities say multiple people were killed in the attack, but they haven't said how many were killed or wounded, according to AP.

WalMart said in a statement: "We're in shock over the tragic events at Cielo Vista Mall... We're praying for the victims, the community & our associates, as well as the first responders".

We're in shock over the tragic events at Cielo Vista Mall in El Paso, where store 2201 & club 6502 are located. We’re praying for the victims, the community & our associates, as well as the first responders. We’re working closely with law enforcement & will update as appropriate.

According to AP, citing El Paso Police spokesman Robert Gomez, a deadly attack at Walmart was carried out by a single gunman who is in custody. However, the US investigators are still reportedly trying to determine what happened during the attack. Robert Gomez said, cited by AP, that multiple people were shot but he didn't say how many.

Terrible shootings in ElPaso, Texas. Reports are very bad, many killed. Working with State and Local authorities, and Law Enforcement. Spoke to Governor to pledge total support of Federal Government. God be with you all!

BREAKING: confirmed photos of suspected shooter as they entered the Cielo Vista Walmart in El Paso this morning pic.twitter.com/HYsFtGxuJ2

According to local media, citing El Paso police, there was a facebook post made by the suspect shooter before the attack.

Texas Governor Greg Abbott called the incident "heinous and senseless act of violence" in a statement, adding that "We have deployed troopers, special agents, Texas rangers, tactical teams, and aircraft to the scene in a support role".

Meanwhile, Mayor Dee Margo has confirmed to CNN that a total of three suspects are currently in custody.

Presidential candidate and former Texas congressman Beto O'Rourke said he had heard reports that the shooter might have had a military-style weapon, adding we need to "keep that (expletive) on the battlefield and do not bring it into our communities [...] We have to find some reason for optimism and hope or else we consign ourselves to a future where nearly 40,000 people are year will lose their lives to gun violence and I cannot accept that", O'Rourke said, cited by CBS.

This video was taken by Joshua Anthony who says this was at McDonald's inside Walmart near Cielo Vista Mall in El Paso, TX. Gunshots can be heard as customers are seen hiding under tables. Police report multiple fatalities.
STORY: https://t.co/wcjf98R97M
VIDEO: Joshua Anthony pic.twitter.com/usma6UdXU0

According to AFP, at least 20 people were killed in a mass shooting at the El Paso Mall. AFP also said, citing local officials, that at least 3 suspects had been apprehended.

⚠️Video from inside JCPENNY in Cielo Vista Mall as it was being evacuated, due to an active shooter in the area.
Video: Victoria Balderrama pic.twitter.com/7v67DL4mPG

BREAKING: Police are advising everyone avoid the Cielo Vista area as an active shooter alert is in effect near the Cielo Vista Mall area #ElPaso #ElPasoShooting pic.twitter.com/cNpa5Z90Rd

Presidential hopeful and Texas Congressman Beto O'Rourke has commented on the situation.

"Truly heartbreaking. Stay safe, El Paso. Please follow all directions of emergency personnel as we continue to get more updates", he said.

Scene is still Active. We have multi reports of multiple shooters. Please avoid area police conducting search of a very large area. Media staging will be given when area is secure.