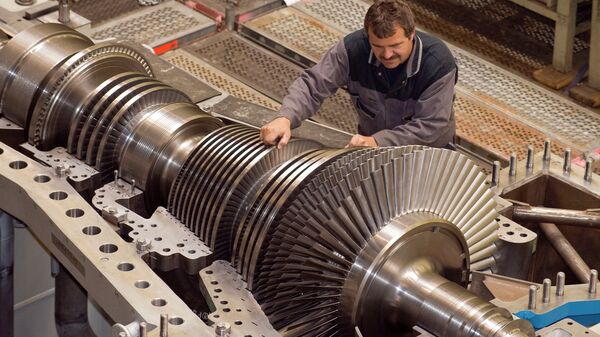 © AP Photo / Martin Meissner
Subscribe
International
India
Africa
The comments follow German factories enduring their worst month for seven years as the car industry reels from a slowdown in demand. Manufacturing activity has declined to a lesser extent in France, Italy and Spain, leading the eurozone to suffer its worst month for economic output since the end of 2012.

A no deal Brexit will plunge Germany into a fully-fledged recession by a No Deal Brexit, the British Chamber of Commerce in Germany (BCCG) has warned.

The organisation, which was established in 1919, has 600 members and represents companies in both countries, predicts a “disorderly” exit would lead to thousands of job losses and reduce Germany’s GDP by at least one percent, and as a result “should be avoided under all circumstances”.

This scaremongering about a no deal Brexit is ridiculous.

Other EU countries will queue up for trade deals.

Germany will still want to sell us cars,France wine and Spain fruit.

And, in turn, they will all be desperate to buy whatever it is we make that they don't.

​Alex Altmann, BCCG co-chair, said as cited by Daily Mail a seven-year low manufacturing output is moving Germany - the largest European economy - further into a risk of recession, and the country’s manufacturers will be watching “the next couple of weeks” very closely “in order to prepare for the worst”.

“The UK is Germany's largest European export market with over 20 percent of all exports going across the Channel. In addition, almost all exports to Ireland go via the UK as well. A no-deal Brexit with customs barriers, regulatory diversion and uncertainty around immigration will cost the German economy around 1 per cent of GDP with the potential of 200,000 job losses in the UK and Germany, which could move the country into a recession in the fourth quarter of this year,” he explained.

Manufacturing isn’t the only industry currently suffering in Germany - Deutsche Bank, the largest banking services group in the country with well over a trillion dollars worth of assets, made a €3.1 billion net loss in the second quarter of this year, its biggest quarterly loss in four years and the second largest since the final months of 2008 when the financial crisis erupted.

Love this guy!! “Some people would call it extortion”

German MP Dr Gauland slams the EU’s reckless & spiteful approach to Brexit and calls out the backstop. He also warns of no deal damage to Germany.

​The primary driver of the bank’s historically poor performance is the €3.4 billion it’s spent so far on a major restructuring of its operations, which has seen overseas offices and entire divisions scrapped, and almost 1,000 staff sacked – but its net income also dropped by over 40 percent to €231 million in the second quarter, year-on-year - the lender is predicted to report a full-year loss for 2019. Deutsche shares fell 2.4 percent in response to the results.