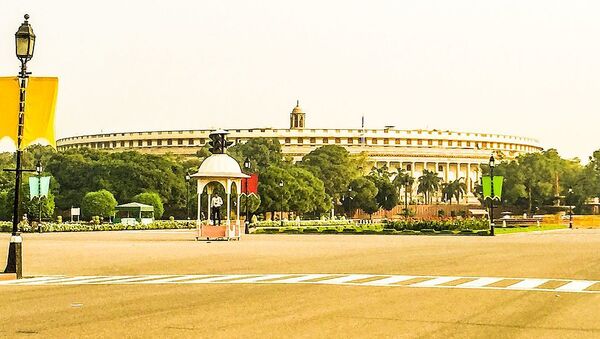 CC BY-SA 4.0 / IM3847 / Indian Parliament
Subscribe
New Delhi (Sputnik): The Indian Parliament has passed controversial legislation enabling the government to designate individuals as terrorists, while the opposition has alleged it would infringe on a person's civil liberties.

It redefines the idea of terrorism – allowing the federal government to declare “a person a terrorist when they take part in terror activities, or provide funds, or harbour a terror theory".

The proposed legislation provides sweeping powers to the National Investigative Agency (NIA) to investigate cases anywhere in the country, without prior permission of the state governments.

India's government holds that the legislation will help crack down on terrorism in the country, which was necessitated in the wake of increased activities by secessionist groups operating in India and abroad.

"The nature of cases pertaining to terrorism registered by the NIA is very complicated. There are issues that arise between countries and states", argued federal Home Minister Amit Shah during discussions. "There have been many problems, especially inter-state, that have arisen as a result of the cases being with the state police".

Opposition parties have also taken exception to the provisions empowering the investigative agency to seize the property of such persons, even while a probe is pending.

"It is not the freedom of organisation we are talking about it is the liberty of the individual", countered P. Chidambaram of the opposition Congress Party and a former Home Minister.

Shah however, assured the House that the law may not be misused nor anybody’s human rights violated, because the legislation provides for a four-stage scrutiny, with provision for appeal.