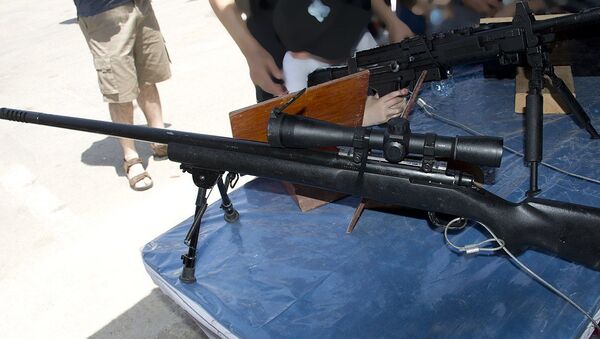 New Delhi (Sputnik): The Indian Army has seized a cache of US-made M-24 sniper rifles, along with telescopes and landmines, from militants who allegedly wanted to attack Hindu pilgrims heading to undertake an annual pilgrimage in the Kashmir Valley.

The seizure was made by the Indian Army days after receiving inputs of the Pakistani Army’s possible bid to disrupt the pilgrimage, which is undertaken by thousands of people every year.

Chinar Corps Commander Lt General K.J.S. Dhillon, who led the troops in the Kashmir Valley, on Friday claimed that Pakistan has been trying to disrupt the peace in Kashmir.

According to Dhillon, “there were confirmed intelligence reports that terrorists backed by Pakistan and its army are trying to disrupt Amarnath Yatra”.

"IEDs have been recovered. Caches of ammunition, explosives and weapons have been recovered along the Amarnath yatra routes. Searches are still going on. One of the weapons (M-24) is here. Pakistan army mine has been recovered in the searches", Lt General Dhillon said, with the army recently having discovered a landmine with markings of the “Pakistan Ordnance Factory”.

Wonder how a US sniper rifle was seized from terrorists in #Kashmir?
US continues its military assistance to Pakistan...
US recently approved $125 million worth of support for Pakistan’s F-16 fleet
Last year @realDonaldTrump accused Islamabad of “nothing but lies and deceit” pic.twitter.com/rF8tAmzmNV

Over the last few days, the Indian Army has managed to neutralise several militants and nabbed three of them in the Kashmir Valley. The army operation is still ongoing.

Meanwhile, the Indian government has put its army and air force on high operational alert in the Kashmir Valley amid "unprecedented" tension at the border with Pakistan.

"We're getting inputs that violence levels are likely to be increased by militants. So, we've tried to strengthen grid on ground. Also, we've been told that troops must get time to relax. This is the time for turnover. But grid will be in as much active form as required", Jammu and Kashmir state Police Chief Dilbag Singh said.