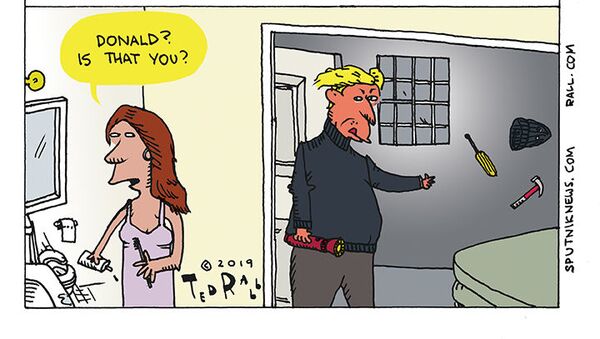 © Sputnik / Ted Rall
Subscribe
International
India
Africa
As police look for clues into who may have burglarized the home of Rep. Elijah Cummings (D-MD), US President Donald Trump took to Twitter to offer his not-so heartfelt condolences for the crime, generating a social media shockwave that not even Nikki Haley could ignore

From labeling Cummings a racist to calling his district, which includes a large portion of Baltimore, a “disgusting, rat and rodent infested mess,” Trump has had a lot to say about the congressman this past week, but 45 turned things up a notch on Friday by responding to news reports of Cummings’ house being broken into.

“Really bad news! The Baltimore house of Elijah Cummings was robbed. Too bad!” Trump said in a tweet. The attempted burglary occurred on July 27, before Trump began tweeting about him, and according to a statement from Cummings, he scared off the intruder before he could gain entry to the “residential portion of the house.”

Many netizens have dismissed Trump’s comments, saying they make him seem more like a “smalltime gangster” than the US president. In fact, even former US Ambassador to the UN Nikki Haley replied to the tweet, saying, “This is so unnecessary,” followed by an eyeroll emoji.

This is so unnecessary. 🙄

However, her denouncement caused the Twitter community to also take Haley to task for her so-called spinelessness while working for the White House.