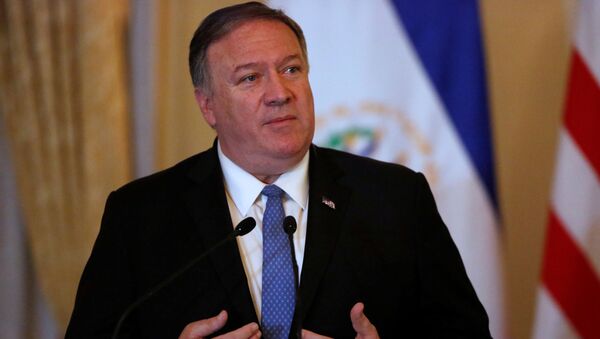 © REUTERS / JOSE CABEZAS
Subscribe
International
India
Africa
WASHINGTON (Sputnik) - The United States continues to pursue a diplomatic solution and a new comprehensive nuclear agreement with Iran amid the escalating tensions with that country, US Secretary of State Mike Pompeo said in a news release.

"The United States continues to seek a diplomatic solution that addresses the Iranian regime’s destructive behavior", Pompeo said on Wednesday. "The only path forward is a comprehensive deal that addresses the full range of its threats".

Pompeo said that until such outcome materializes, the United States will continue its maximum pressure campaign against Iran.

The United States proclaimed it intends to bring down Iran’s sale of oil to zero and re-introduced sanctions on almost all major sectors of the Iranian economy.

In May, Iran announced its decision to partially suspend obligations under the nuclear agreement and gave the other signatories 60 days to save the accord by facilitating oil exports and trade with Tehran.

Since 5 May, the United States has been building up its military presence in the Persian Gulf. Washington has deployed an aircraft carrier strike group, Patriot missiles, B-52 bombers, F-15 fighters and a destroyer, according to the Defence Department.