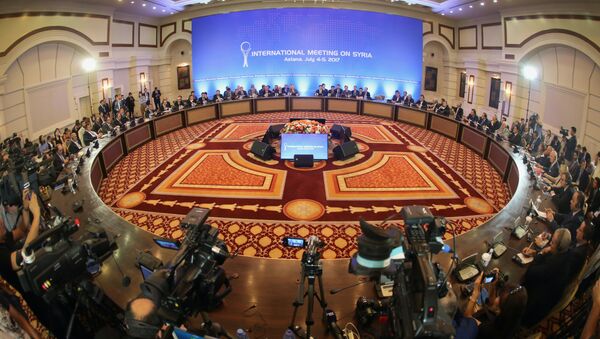 © AFP 2021 / STANISLAV FILIPPOV
Subscribe
UNITED NATIONS (Sputnik) - The United Nations will be represented at the upcoming Astana format peace talks on Syria regardless of the special envoy’s for the country inability to attend the meeting, UN Spokesperson Stephane Dujarric said in a press briefing on Wednesday.

"The UN will be represented in Astana", Dujarric said, adding that he had no information about who exactly will be traveling to the Kazakh capital.

Earlier in the day, the Kazakh Foreign Ministry said that UN Special Envoy for Syria Geir Pedersen would not be able to attend the talks due to health reasons, and his deputy would head the UN delegation.

The 13th round of Astana peace talks on Syria will be held from Thursday to Friday. The meeting will feature representatives of the Syrian government and opposition, as well as Russia, Turkey, Iran — the guarantors of the national ceasefire — Jordan, Lebanon, Iraq and the United Nations. They will discuss the current state of the Syrian conflict, particularly the latest developments in opposition-held Idlib.

Earlier in July, Pedersen's office said that he would have to limit his work and avoid traveling in the near future over an eye injury.

The settlement process for the Syrian conflict, which broke out in 2011, has been discussed on a number of international platforms, such as those in Geneva and the Kazakh capital, which convene regularly, as well as in the Syrian National Dialogue Congress in Russia's Sochi.