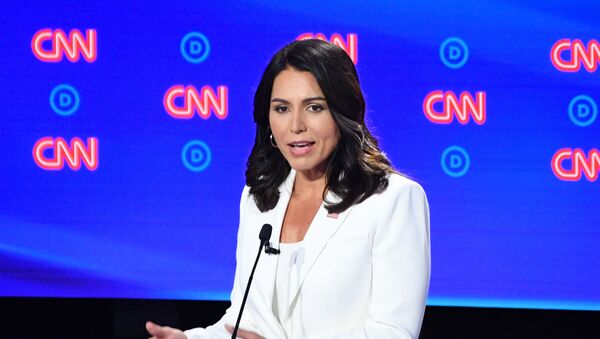 2020 presidential hopeful Tulsi Gabbard has skyrocketed to No. 1 in Google Trends after blasting the current US administration's "warmongering" foreign policy during the second Democratic presidential debate on Wednesday.

Democratic House Representative for Hawaii Tulsi Gabbard has blasted the Trump administration for pushing the United States closer to the "brink of nuclear catastrophe" since relations with a number of nuclear armed countries have dramatically escalated in the past few months.

"Donald Trump and warmongering politicians in Washington have failed us. They continue to escalate tensions with other nuclear armed countries like Russia and China, and North Korea, starting a new Cold War, pushing us closer and closer to the brink of nuclear catastrophe. Now as we stand here tonight, there are thousands of nuclear missiles pointed at us... As president, I will end this insanity", she added.

Trump & warmongering politicians have failed us. They continue to escalate tensions w/ other nuclear armed countries pushing us closer & closer to the brink of nuclear catastrophe. As president, I will end this insanity. #DemDebate #TULSI2020 https://t.co/n6rAgZ1sH7 pic.twitter.com/e6H1fwdQEK

Following her speech, Gabbard took the number one spot in Google Trends, becoming the most searched Democratic candidate on the platform.

Following the last two debates, Tulsi has spiked to #1 in Google Trends, showing America is hungry for her message of ending wasteful wars and the nuclear arms race. Join us to ensure she makes the donation requirement for the September debate #DemDebate https://t.co/pcTHp1M8ei pic.twitter.com/x4FS7oVK5P

'Trump Betrayed US on Afghanistan Pullout'

Speaking at the second Democratic presidential debate on Wednesday, she also accused the US president of betraying the American people by failing to deliver on his promise to quickly withdraw troops from Afghanistan.

Gabbard pledged to pull out all American forces from Afghanistan if elected president next year and end the 18-year war in the country:

The Iraq War veteran cited the example of the 2003 conflict, which broke out after the George W. Bush administration falsely claimed that Baghdad produced weapons of mass destruction.

"We were all lied to. This is the betrayal. The problem is that this current president continues to betray us", she added.

Gabbard's comments follow an interview by US Secretary of State Mike Pompeo with Economic Club of Washington President David Rubenstein in which he emphasised that President Trump had ordered to "end the endless wars, draw down, reduce" the number of US troops stationed in Afghanistan before the 2020 elections.

Pompeo as well noted that he was hoping for a positive outcome of US negotiations with the Taliban, an Islamic insurgent movement, the Afghan government and opposition groups inside the country that will result in a peace agreement to put an end to the 18-year war.

President Trump has long expressed a desire to pull out American troops from Afghanistan, saying that the future reductions in US forces would be tied to progress in peace talks. In June POTUS indicated that the US was "doing fine" there and will soon see its soldiers halved to 8,000.

Back in February, The New York Times reported that a Defence Department proposal for the peace talks with the Taliban stipulated that all American troops - an estimated 14,000 - be withdrawn in the next three to five years along with the rest of the international forces in the country.

The United States invaded Afghanistan in 2001 in response to the 9/11 terrorist attacks on American soil and overthrew the Taliban, which seized power in the Central Asian country in 1996. At the time, Washington said that Kabul had become a safe haven for al-Qaeda* while the Taliban was in power.

Most US troops were withdrawn from Afghanistan by the end of 2014, but a relatively small contingent has continued to support the Afghan Armed Forces in combating terrorism.

*Al-Qaeda is a terrorist organisation banned in many countries.