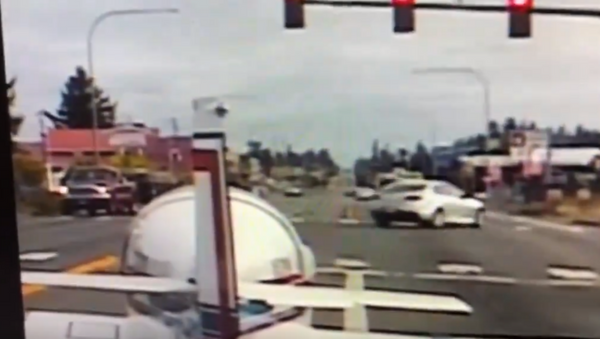 On Thursday morning, a small plane made an emergency landing on Pacific Avenue in Washington state’s Pierce County after running out of fuel.

Dramatic dash camera footage shows the single-propeller aircraft landing the plane on a busy street at around 8:20 a.m. The pilot was able to safely land the plane after a state trooper cleared traffic for the aircraft, according to eyewitness Stu Dewitt.

​Soon after the plane landed, state troopers helped push the plane off the road to a nearby Jiffy Lube parking lot, according to multiple reports.

"Usually, we say it's a series of unfortunate events - this is a series of very lucky events. There happened to be a break in traffic; he was able to hit that break safely and not come into contact with any vehicles or pedestrians," Trooper Johnna Batiste told KIRO7.

There were no reported injuries or damage caused by the emergency landing. However, the US Federal Aviation Administration will be investigating the incident.