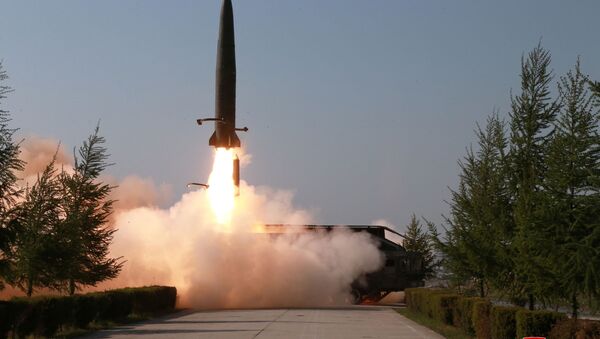 © REUTERS / KCNA
Subscribe
Despite reports that denuclearization talks between the US and North Korea will resume soon, the US political and military establishment doesn't want a peaceful resolution on the Korean Peninsula, author and professor Tim Beal, whose most recent book is “Crisis in Korea,” told Radio Sputnik’s Loud & Clear.

North Korea had also previously test fired two short-range ballistic missiles into the Sea of Japan last week. Shortly thereafter, North Korean state-run media reported that the launches were tests of a new tactical guided weapon and were meant to serve as a warning to South Korea against boosting its military or joining US-led war games.

“They [North Korea] have to develop missiles like everyone else, in a sense. So, that’s always there in the background. The timing of this is a matter of something they have control over. It’s a matter of sending messages, primarily to the US and South Korea, mainly about the [military] exercises. More than that … they signify a lack of commitment by the US about serious negotiations,” Beal told hosts John Kiriakou and Brian Becker, noting that the US and other countries routinely test missiles as well.

“I think we can be pretty sure that 60 countries have missiles. They all have to be tested. So, there must be an awful lot of missile tests that go on … constantly, but of course media cherry picks and gives a completely [deliberately] misleading impression of who is actually doing the most missile tests,” Beal told Sputnik.

In fact, attempting to determine how many missiles the US government has tested in the last year through a simple Google search is futile, Becker noted.

In May, a US test firing of one of its Minuteman III intercontinental ballistic missiles from the California coast was preceded and followed by North Korean missile tests just minutes before and after the American test.

On Monday, South Korean media reported that Seoul plans to send a naval unit, which includes a destroyer, to guard oil tankers passing through the Strait of Hormuz as part of a US-led maritime force in the region, as tensions between the US and Iran continue to increase since the Trump administration reimposed sanctions on Tehran after pulling out of the Joint Comprehensive Plan of Action nuclear deal last year.

“There’s a general history of South Korea being subservient to the US. Don’t forget South Korea as a state was created by the US … So it’s not merely [South Korean President] Moon Jae In,” Beal noted, adding that the ship deployment may have more historical significance than as a simple show of loyalty to the Trump administration to persuade it to negotiate with the North.

000000
Popular comments
Of course they don't want a peaceful resolution. They never have. The DPRK must at all costs continue their nuclear development program and expand it. Arm twisting, charm offenses, sanctions and pressure from China and Russia who are obviously in co-hoots with the criminal syndicate in Washington and Soule for economic gains once the DPRK is disarmed and destroyed and the South takes over must be rejected. The people of the DPRK are extremely lucky to have the leadership of comrade Chairman Kim Jong-Un who sees through these shinanigans.
hopscotch64
1 August 2019, 05:42 GMT1
000000
Kim Jong-un is fully aware of the fact , US has always aimed for a regime change . That's why the North Korean plays games at the meetings . No upset will happen as China uses North Korea as an attack dog , it's foremost weapon to deter potential invaders . The connection is very close , unbreakable , yet to be realised by the US and so obvious to even an amateur analyst like me .