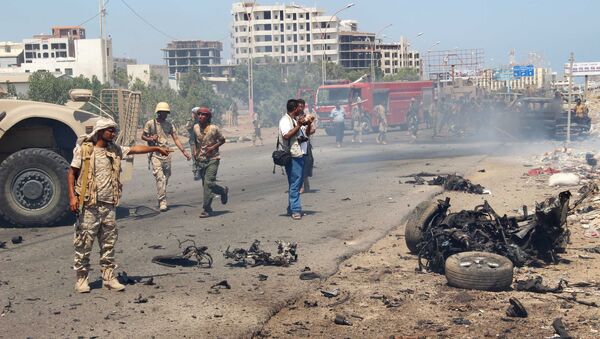 The Houthi movement has claimed responsibility for the incident, stating they had launched a medium-range ballistic missile and an armed drone at the event.

A blast struck a military parade in the Buraiqa District of Aden, killing up to 32 people and injuring dozens, Reuters reported on Thursday, citing a defence source. According to the Saudi broadcaster, a senior commander of the support forces, Brig. Munir Al Yafi was killed in the attack.

Before that a suicide attacker drove a car into the gates of the police station in the Omar al-Mokhtar neighbourhood of the city. According to various reports, up to three officers were killed by the explosion.

Yemen has been locked in a conflict between government forces, led by President Abd Rabbuh Mansour Hadi, based in Aden, and the Houthi movement. A Saudi-led coalition has been conducting strikes against the Houthis at Hadi's request since March 2015. The conflict has resulted in a massive humanitarian crisis in the country.