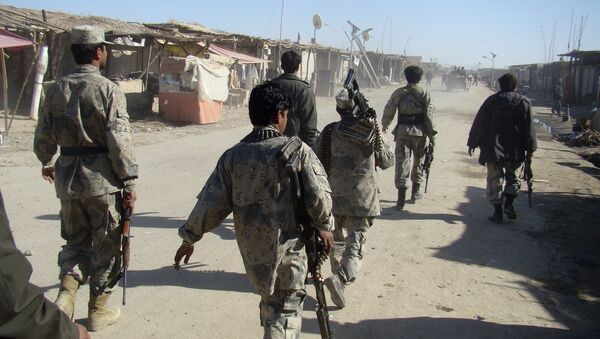 © AP Photo / Abdul Khaliq
Subscribe
According to a new report by the Special Inspector General for Afghanistan Reconstruction, Afghan military and police force strength has declined by 20% since its previous quarterly report, reaching its lowest levels since 2015. However, the change might be due to a new tallying method.

As of late May, there were only 272,465 soldiers and police on the Afghan payroll, according to SIGAR - a 20% drop from the 352,000 recorded in December and noted in the previous quarterly report, issued on April 30.

The watchdog’s newest report, issued on July 30, notes that the total, which includes 9,554 fewer army and air force personnel and nearly 25,000 fewer police, was probably so much lower than before because of the new Afghan Personnel and Pay System, as this was the first staffing tally to count forces using those biometrically enrolled in the system.

APPS is part of Kabul’s ongoing effort to crack down on corruption, particularly the collection of paychecks issued to so-called “ghost” police - former officers who are still being paid, “even if they have resigned, been terminated, or killed,” the report notes.

However, SIGAR notes that other Afghan efforts to combat corruption are way down. The Afghan government recovered only 0.2% of the $185.2 million in financial penalties imposed by the Anti-Corruption Justice Center (ACJC). The ACJC’s independent prosecutors focus their efforts on high-profile corruption cases, targeting generals, provincial leaders and even deputy government ministers. This is despite a sharp increase in prosecutions since 2018, SIGAR notes.

A previous SIGAR report in 2018 eviscerated the ACJC, blasting the anti-corruption center as itself corrupt, Sputnik reported.

NATO’s mission in Afghanistan, Resolute Support, reported to SIGAR 6,445 enemy-initiated attacks since March 31, with more than half of them occurring in five of Afghanistan’s 34 provinces: Helmand, Badghis, Faryab, Herat and Farah. This is a 9% increase from the previous quarter, but 10% less than the same period last year, Stars and Stripes noted.

On Tuesday, the UN Assistance Mission in Afghanistan (UNAMA) decried Afghan civilian deaths as “shocking and unacceptable,” although the number of civilians killed or wounded in the country so far this year was also much lower than at this time last year, with 1,366 civilians killed and 2,446 injured, according to UNAMA. However, SIGAR’s report only records 757 killed and 1,949 civilians wounded between January 1 and May 31, 2019.

Last October, Resolute Support informed SIGAR it would no longer be reporting “district control data” showing what percentage of the Afghan population is controlled by the Taliban, saying the data was of little use. Sputnik noted the news paralleled denunciations of the practice by US President Donald Trump, who said the reports “should be private,” since what’s available to the public is available to the enemy as well.

000000
Popular comments
Afghanistan: if only western could know the abiss have they done!
francescoslossel
2 August 2019, 01:02 GMT1
000000
They reached their lowest levels because u.s. is killing them.
Foxylady
2 August 2019, 01:10 GMT1
000000
Newsfeed
0
New firstOld first
loader
LIVE
Заголовок открываемого материала
Access to the chat has been blocked for violating the rules . You will be able to participate again through:∞. If you do not agree with the blocking, please use the feedback form
The discussion is closed. You can participate in the discussion within 24 hours after the publication of the article.
To participate in the discussion
log in or register
loader
Chats
Заголовок открываемого материала
Worldwide
InternationalEnglishEnglishMundoEspañolSpanish
Europe
DeutschlandDeutschGermanFranceFrançaisFrenchΕλλάδαΕλληνικάGreekItaliaItalianoItalianČeská republikaČeštinaCzechPolskaPolskiPolishСрбиjаСрпскиSerbianLatvijaLatviešuLatvianLietuvaLietuviųLithuanianMoldovaMoldoveneascăMoldavianБеларусьБеларускiBelarusian
Transcaucasia
ԱրմենիաՀայերենArmenianАҧсныАҧсышәалаAbkhazХуссар ИрыстонИронауОssetianსაქართველოქართულიGeorgianAzərbaycanАzərbaycancaAzerbaijani
Middle East
Sputnik عربيArabicArabicTürkiyeTürkçeTurkishSputnik ایرانPersianPersianSputnik افغانستانDariDari
Central Asia
ҚазақстанҚазақ тіліKazakhКыргызстанКыргызчаKyrgyzOʻzbekistonЎзбекчаUzbekТоҷикистонТоҷикӣTajik
East & Southeast Asia
Việt NamTiếng ViệtVietnamese日本日本語Japanese俄罗斯卫星通讯社中文（简体）Chinese (simplified)俄罗斯卫星通讯社中文（繁体）Chinese (traditional)
South America
BrasilPortuguêsPortuguese
NewsfeedBreaking
06:54 GMTHikers Find Live Nazi Grenade From World War II Near Swedish Ski Resort
06:48 GMTScania Scandal: Swedish Carmaker Investigated for Bribery Over Deal With Indian Minister
06:37 GMT25 Injured After Explosion in Residential Building in Gothenburg, Sweden, Reports Say
06:13 GMTGerman Chancellor Candidates in Focus as Tough Coalition Talks Loom
05:53 GMTBrexit to Blame: Germany's Olaf Scholz Says 'End to Freedom of Movement' Fueled UK Petrol Crisis
05:37 GMTUK Motorist Runs Over 'Knife-Wielding' Man Amid Alleged Petrol Dispute - Video
05:23 GMTPatriarchy Strikes Back? Iceland's Historic Female-Majority Parliament Up in Smoke After Recount
04:43 GMTUS Marine Colonel Put in Brig For ‘Asking for Accountability’ Over US Departure From Afghanistan
04:03 GMTWitness Who Claims She Saw Prince Andrew Dancing With Giuffre at Club to Testify in Court - Report
03:24 GMTBennett Claims He Said 'No Three Times’ to President Biden During Their August Meeting
03:16 GMTRepublicans Slam DHS Chief Mayorkas for Allowing Thousands of Haitians Into US
01:37 GMTUS ‘Humiliated Like Never Before’, Trump Says, After DHS Allowed Thousands of Migrants to Pour in
01:31 GMTLockheed Martin to Build US Army’s Next Generation Tactical Vehicle Based System
01:10 GMTBorder Patrol Agents Disgruntled Over Biden's Attempts to Throw Them 'Under the Bus' - Report
00:53 GMTBeard-Check: Afghan Barbers Banned From Shaving, Trimming Beards - Reports
00:27 GMTR. Kelly Found Guilty: Will Artist Be Removed From Music Services?
00:03 GMTIs Sir Alex Ferguson Right, That Ronaldo, and not Messi, Could Score a Hat-trick for Anyone?
00:00 GMTUS Senator Menendez Urges New Sanctions on Turkey if It Acquires More Russian Weapons
YesterdayInsurgents Who Detained President of Guinea Declare Transitional Charter - Reports
YesterdayTexas Lawmakers Propose New Congressional Districts in Cities of Austin, Houston