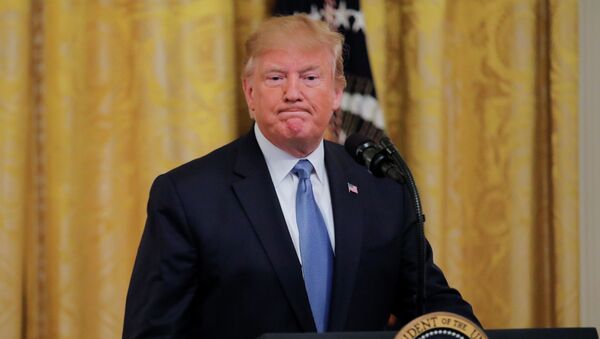 While Democrats are engaged in heated discussions in the race to the 2020 presidential elections, Trump is bragging about the economic successes of his administration, following pre-election pledges to improve the US economy and raise employment rates.

“If I hadn’t won the 2016 Election, we would be in a Great Recession/Depression right now,” Trump tweeted on Wednesday the 31st, a day after the second Democratic presidential debate. POTUS claimed that the Democratic candidates onstage “will lead us into an economic sinkhole”.

If I hadn’t won the 2016 Election, we would be in a Great Recession/Depression right now. The people I saw on stage last night, & you can add in Sleepy Joe, Harris, & the rest, will lead us into an economic sinkhole the likes of which we have never seen before. With me, only up!

​Economic indicators have been strong during Trump’s time in the office, with the GDP growth indicated as 2.1 percent in the second quarter of 2019, according to statistics from the Financial Times. Additionally, the Trading Economics portal revealed a significant drop in unemployment in recent months, with only 3.7 percent in June.

Some Twitter users overtly supported Trump in his self-praise by arguing that as president, he has been a “historic success for the American economy”.

President Trump has been a historic success for the American economy. The socialist policies of the democrats would destroy the amazing economy that Trump has built.

​Others, however, admitted that he was given a good start, after US President Barack Obama “lifted [the] USA from a recession” prior to Trump’s inauguration.

​As Trump’s campaign rally in Florida on the 19th June showed, he is determined to use economic successes under his administration as a vivid motto for his re-election campaign. A favourable economic situation coincides with Trump’s initial 2016 election promises to "put Americans back to work" and "rebuild our infrastructure", re-instated in his victory speech.

In the meantime, 10 candidates from the Democratic Party gathered on 30 July for a second round of Democratic 2020 presidential debate. A heated discussion revealed deep party divisions on a number of issues, including Medicare For All and the Green New Deal.

The second night of the second Democratic 2020 presidential debates begins on 31 July.