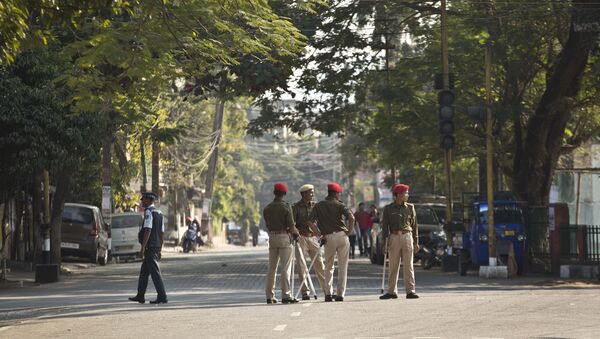 © AP Photo / Anupam Nath
Subscribe
New Delhi (Sputnik): India's Central Bureau of Investigation (CBI) has set up a special team to investigate the Unnao rape and murder case, following a huge uproar in the country and harsh criticism in Parliament.

Earlier in the day, a team from the Central Bureau of Investigation (CBI), which is investigating the 28 July truck-car collision that left a teenage rape victim in Uttar Pradesh state critically injured visited the crime scene.

Wednesday’s development came after the Central Government asked the CBI to probe the case.

The CBI has also filed a case against jailed BJP legislator Kuldeep Singh Sengar, his brother and nine others, including Arun Singh, the son-in-law of Uttar Pradesh Agriculture Minister Ranvendra Pratap Singh, a media report said.

Cases have also been opened against 20 other unknown persons on charges of criminal conspiracy, murder, attempted murder and criminal intimidation, the report added.

On Wednesday, India’s Supreme Court Chief Justice Ranjan Gogoi noted a 12 July letter written by the family of the rape victim alleging threats received from Sengar loyalists. The family claimed that a copy of the letter had been delivered to the Supreme Court on 17 July.

Given the gravity of the crime, the court has sought the medical report of the victim and asked the court’s Secretary General to explain the delay in handing the letter to the Chief Justice.

The hearing will be held on 1 August.

Chief Justice Gogoi said a highly destructive environment exists in the country and that the Supreme Court will do “something constructive” in relation to the case.

The CBI team has collected all documents related to the case from police in Uttar Pradesh.

The victim hails from Uttar Pradesh’s Unnao district. She was allegedly raped two years ago and she accused BJP lawmaker Sengar of the crime. She later informed police that Sengar despite being in jail was issuing threats to her and her family.

On Sunday, 28 July, she along with her two aunts and a lawyer were critically injured when a truck hit their car near Rae Bareli while they were heading to meet her uncle in jail.

She is now fighting for her life in a Lucknow hospital. She remains on life support with a damaged lung and several fractures.