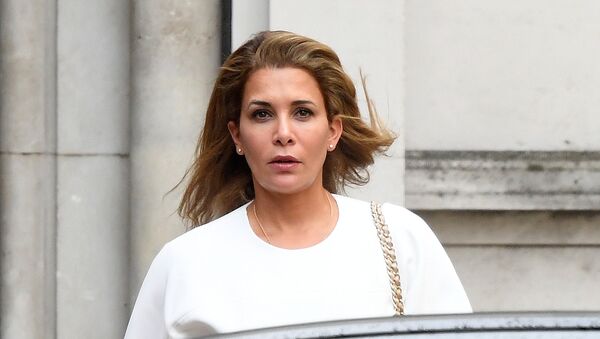 © REUTERS / TOBY MELVILLE
Subscribe
Princess Haya bint al-Hussein, the daughter of Jordan’s late King Hussein and half-sister to his successor King Abdullah, fled the UAE last month for Europe and is now understood to be in hiding in the United Kingdom. Emirati officials have declined to comment, citing the privacy of the case.

Princess Haya is seeking a forced married protection order in the UK, relating to one of her two children with Dubai ruler Sheikh Mohammed bin Rashid al-Maktoum, Reuters reports.

According to British laws, forced marriage protection is enforced to shield a person who has been or being forced into marriage, or is being threatened with one.

It is also understood that Princess Haya has applied for a non-molestation order as well as wardship of her children, with whom she left the UAE – daughter Sheikha Al Jalila, 11, and son Sheikh Zayed, 7.

Sheikh Mohammed’s lawyers, meanwhile, have applied for the return of his children to Dubai.

The London embassy of the UAE declined to comment “on allegations about individuals’ private lives”, while the Dubai government described it as “a private matter that is being resolved in the court”.

Earlier this month, representatives of Sheikh Mohammed and his estranged wife said at a private hearing that “these proceedings are concerned with the welfare of the two children of their marriage and do not concern divorce or finances.”

Why is Princess Haya in London?

Princess Haya, 45, was widely reported by British media to have left Sheikh Mohammed’s court in late June with millions in cash.

Speculation surfaced that she escaped after the sheikh – who is also vice president and prime minister of the UAE – became disturbed with her alleged “inappropriate intimacy” with a British bodyguard.

Around the time of her escape, an Instagram account thought to be linked with Sheikh Mohammed posted a rant denouncing an unidentified woman for betrayal.

Other reports suggested that Princess Haya left Dubai after learning disturbing details about Princess Latifa, a daughter of Sheikh Mohammed from another wife, last year.

Last spring, Princess Latifa allegedly tried to escape from the country by sea but was intercepted by a vessel in the Indian Ocean and returned home.

The UAE denied the claims and in December released photos showing that Princess Latifa was at home “receiving the necessary care and support she requires”.

Neither Sheikh Mohammed and his court nor Princess Latifa have given public comments on the ongoing proceedings.