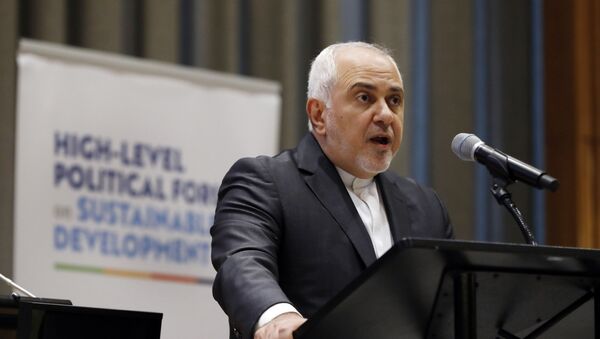 According to a senior US official, the Trump administration is not closing the door to potential nuclear talks on the JCPOA with Iran by sanctioning Zarif, whom it does not consider a significant decision maker.

"You might have noticed that we actually withdrew from the JCPOA [Joint Comprehensive Plan of Action] a little over a year ago, so we do not consider him [Zarif] to be our primary point of contact," the official said. "If we do have an official contact with Iran, we would want to have contact with somebody who is a significant decision-maker".

A senior Trump administration official told reporters on Wednesday that the US Department of State will review on a case-by-case basis whether the sanctioned Zarif can travel to the United Nations headquarters in New York.

In addition, the Trump administration has not placed any restrictions on foreign leaders to communicate with sanctioned Iran Foreign Minister Mohammad Zarif.

"President Trump has been very open that he is ready to speak to the senior leadership in Tehran, and that he had certainly not prevented any of our friends or allies from communication with him as well", the official said. "The President has placed no restrictions on elected officials having conversations with foreign counterparts".

Iran has not accepted the US offer to initiate dialogue.

"[US President Donald Trump] is absolutely sincere in his offers of dialogue. The Iranians have chosen not to accept them", the official said on Wednesday.

According to the US official, the Iranian Foreign Affairs Ministry has allegedly engaged in and funded efforts to influence foreign elections.

"[Iran's] Ministry of Foreign Affairs and its high-ranking officials have engaged in and funded efforts to influence elections", the official claimed.

Meanwhile, Zarif has responded to the US move, observing that Washington considers him "such a huge threat".

Ties between the United States and Iran soured last year after Washington pulled out of a nuclear deal with Tehran and reimposed sanctions. Germany, France and the United Kingdom said they wanted to preserve the 2015 JCPOA agreement, also known as Iran nuclear deal.

In May, Iran exceeded the limit set under the nuclear treaty on its uranium stockpile after accusing Germany, France and the United Kingdom of not doing enough to shield the country from US sanctions.

Iran said it would continue rolling back its commitments in early September if EU countries did not stand up to "US economic terrorism," although Foreign Minister Zarif promised that the roll-back could be reversed.