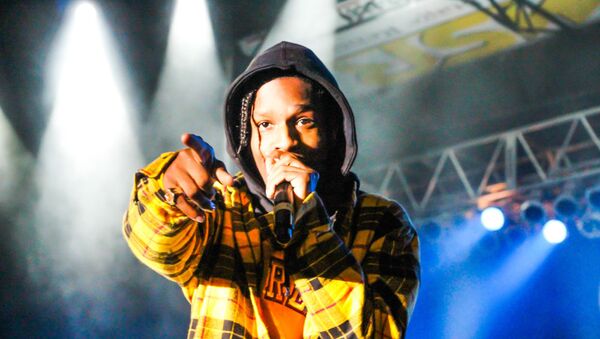 CC BY 2.0 / Chad Cooper / A$AP Rocky
Subscribe
International
India
Africa
The detention of the 30-year-old entertainer, whose real name is Rakim Mayers, over a street brawl in Stockholm in the early hours of 30 June, has prompted an international outcry, with numerous celebrities and high-ranking politicians, including US President Donald Trump himself, supporting the artist.

US rap star A$AP Rocky has pleaded not guilty to a charge of assault on the first day of a trial in Sweden that has made international headlines and even and prompted President Donald Trump to intervene on the rapper’s behalf.

During the first day of the trial on Tuesday, A$AP Rocky and his two bodyguards denied the accusations of assault and inflicting bodily harm against a local resident, the Swedish newspaper Aftonbladet reported. The rap star admitted having hit and kicked the 19-year-old plaintiff, Mustafa Jafari, but insisted that this happened in self-defence, as did his crew.

The plaintiff demanded SEK 139,700 (almost $15,000) in damages for the abuse he claims to have suffered at the hand of Rocky and his entourage, which includes assault, lost income and appearance damages.

According to the preliminary examination protocol, the 19-year-old's nose was twisted and broken during the incident. He was admittedly in lot of pain and had difficulty breathing. The plaintiff also suffered a broken rib, as well as bruises and cuts on several parts of his body, the prosecutor said.

According to the prosecutor, the plaintiff was hit with a bottle, as some of the injuries were likely dealt with a sharp object. He showed a screenshot from the the clip uploaded to Instagram by ASAP Rocky himself, which shows a bottle with a yellow label. No useful DNA has been found on the bottle, however, according to the police investigation.

Both Mayers and the plaintiff will face cross-examination later on Tuesday.

Before his arrest, Mayers stressed that the two men were following his team and that he did not want any trouble. He said the plaintiff provoked him and his two companions, who have also been charged with assault. If they fail to beat the rap at the Stockholm district court, they could face up to two years in jail.

Rocky's almost month-long detention before trial has prompted many angry responses from fans as well as from several artists and other celebrities ranging from Kim Kardashian to fellow rappers. A petition to free the artist has gathered over 600,000 signatures.

The commotion surrounding the jailed rapper even reached US President Trump, who asked Swedish Prime Minister Stefan Löfven to help free Mayers. Trump had said he would personally post Mayers’ bail despite the fact that Sweden does not have a bail system. Later, when Löfven refused to intervene, Trump said he was “very disappointed” in Löfven, whom he previously had called "very talented".

In response, Löfven said he saw "no reason" for dialogue with the US in this particular case. He stressed that the Swedish judicial system was not negotiable, regardless of "who's calling or tweeting".