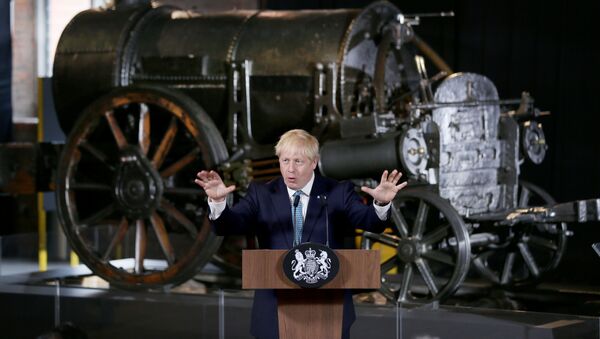 © REUTERS / Lorne Campbell/Pool
Subscribe
It was up to the UK's "friends across the channel", he said while reiterating Britain's preparations for a hard Brexit should London and Brussels fail to negotiate a deal before the 31 October deadline, stating that the "people want use to get on with Brexit".

UK prime minister Boris Johnson said on Tuesday evening that Britain was not aiming for a no-deal Brexit and didn't "think that is where it will end up".

"If they can't compromise, if they really can't do it, then clearly we have to get ready for a no-deal exit," PM Johnson said during his trip to Wales. "It is up to the EU, this is their call, it's their call if they want us to do this."

The more the UK prepares for a no deal-Brexit", "the less likely it is there there will be difficulties", he said, adding that it was up to the European Union to determine the fate of Brexit. "The ball is in your court," he said.

When asked about the plummeting British pound, which fell one to $1.2120 USD on Tuesday, The Prime Minister said that the UK government would not offer to comment.

He also slammed former UK prime minister Theresa May's withdrawal agreement with Brussels, stating that it "won't work", and that "under no circumstances" will the UK have checks on the Northern Irish border.

To be absolutely clear; the refusal by PM Boris Johnson to engage with European leaders and our Taoiseach without pre conditions on the issue of Brexit is unacceptable and is not within the realms of normal diplomatic or political behaviour.

The newly-appointed British PM reiterated his pledge to leaving the EU by 31 October, stating that the UK needed to "get on with it", adding that doing so would "end all the drift and dither for business".

Boris Johnson is visiting Wales as part of his tour of the UK's four countries, including Scotland, Northern Ireland and England, in order to calm fears over Brexit as well as the integrity of the British Union. Welsh farmers have voiced fears that withdrawing from the EU under no-deal terms would topple their economy and that millions of sheep may need to be slaughtered if tariffs are levied on exports to the EU. But the British PM assured that the leaving the EU's Common Agricultural Policy would pose an "historic opportunity to introduce new schemes to support farming" to help UK farmers export to new markets.

12/12 We’ll get over it. We’ll find other ways of reporting such visits. I don’t want special pleading. But change is change and I thought it ought to be made public.

Here’s the statement issued by @merrionstreet following my call with @Borisjohnson pic.twitter.com/2WyjtTNmVg

Mr Johnson's trip to Wales follows his visit to Edinburgh, where he was booed and jeered by locals while meeting Scottish first minister Nicola Sturgeon, who stated his plans to leave the EU on no-deal terms was "dangerous". Boris Johnson also plans to visit Northern Ireland to discuss the contentious Irish backstop and boosting Belfast's economy following a tense conversation with Irish PM Leo Varadkar on Tuesday afternoon over the backstop.

000000
Popular comments
Pure demagogy fro BOJO. He is based his strategy on the high percent of ignorance in the UK. It is customary in the UK not to talk about religions or politics. A lot of families follow this rule to the letter.

landauroj
30 July 2019, 18:10 GMT1
000000
"If they can't compromise, if they really can't do it, then clearly we have to get ready for a no-deal exit," PM Johnson said during his trip to Wales. "It is up to the EU, this is their call, it's their call if they want us to do this." Stop feeling as if the UK is indispensable, you voted to leave and the EU respects your decision!
Guru Ramji
30 July 2019, 20:14 GMT3
000000
Newsfeed
0
New firstOld first
loader
LIVE
Заголовок открываемого материала
Access to the chat has been blocked for violating the rules . You will be able to participate again through:∞. If you do not agree with the blocking, please use the feedback form
The discussion is closed. You can participate in the discussion within 24 hours after the publication of the article.
To participate in the discussion
log in or register
loader
Chats
Заголовок открываемого материала
Worldwide
InternationalEnglishEnglishMundoEspañolSpanish
Europe
DeutschlandDeutschGermanFranceFrançaisFrenchΕλλάδαΕλληνικάGreekItaliaItalianoItalianČeská republikaČeštinaCzechPolskaPolskiPolishСрбиjаСрпскиSerbianLatvijaLatviešuLatvianLietuvaLietuviųLithuanianMoldovaMoldoveneascăMoldavianБеларусьБеларускiBelarusian
Transcaucasia
ԱրմենիաՀայերենArmenianАҧсныАҧсышәалаAbkhazХуссар ИрыстонИронауОssetianსაქართველოქართულიGeorgianAzərbaycanАzərbaycancaAzerbaijani
Middle East
Sputnik عربيArabicArabicTürkiyeTürkçeTurkishSputnik ایرانPersianPersianSputnik افغانستانDariDari
Central Asia
ҚазақстанҚазақ тіліKazakhКыргызстанКыргызчаKyrgyzOʻzbekistonЎзбекчаUzbekТоҷикистонТоҷикӣTajik
East & Southeast Asia
Việt NamTiếng ViệtVietnamese日本日本語Japanese中国中文Chinese
South America
BrasilPortuguêsPortuguese
NewsfeedBreaking
18:23 GMTPutin: Sanctions Under Pretext of US Security Attempt to Contain Russia's Development
18:03 GMTTucker Carlson Warns of Danger of ‘Hot War’ Between US and Russia Over Ukraine
18:02 GMTTrudeau: Canada Will Not Send Diplomatic Representation to China Olympics
17:56 GMT'A Verbal Agreement With Premier League Club? All False': Mancini Dismisses Man United Job Links
17:48 GMTBiden’s Empty Warning Over Putin’s Straw Man ‘Invasion’
17:42 GMTUS Reportedly Becomes Major Destination for UK's Post-Brexit Financial Services Exports
17:41 GMTIndia’s Congress Unveils 'Manifesto for Women' to Woo Voters in Uttar Pradesh
17:31 GMTInitial Sketch Found Beneath Rembrandt's 'Night Watch' - Photo
17:22 GMTIMF: Metals Demand From Clean-Energy Transition Threaten to Top Global Supply
17:16 GMTElon Musk Brands CEO 'Made Up Title,' Explains Why He Became Tesla's 'Technoking'
17:13 GMTIndian Farmers Agree to Call Off Year-Long Protest after Government Promises to Meet Demands
17:03 GMTUS Jobs Quitting Rate in October Down From Record Highs, Labour Department Says
16:40 GMTUS Targets Individuals in Kosovo, El Salvador, Serbia in New Global Magnitsky Sanctions
16:17 GMTBiden Announces Plans for NATO-Russia Meeting to Discuss Moscow's Concerns
16:03 GMTUK Government Spox Stratton Resigns Over No.10 Lockdown Christmas Party Video
15:44 GMTSeven UN Peacekeepers Killed in Explosion in Mali
15:32 GMTOpening Statements: Trial of Ex-Cop Kim Potter Who Killed Black Man Daunte Wright
15:22 GMT'Failing Not An Option': VP Harris Relies on Black Women's Support Amid 'Toxic Management' Claims
15:13 GMTFederal Judge Refuses to Unseal Records of FBI's Raid on Project Veritas Founder
15:05 GMTFrench Police Arrest Two Men Who Allegedly Plotted Christmas Stabbing Attack, Media Reports