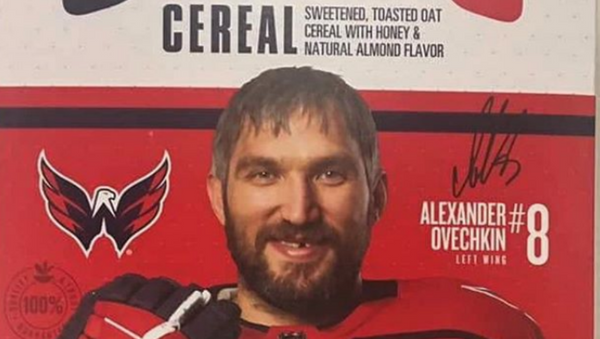 Breakfast just got a lot more exciting for hockey fans.

Alexander Ovechkin, captain of the National Hockey League’s Washington Capitals, will soon have a cereal named after him. An image of the cereal box, labeled as “Ovi O’s” and featuring Ovechkin’s smiling face, was leaked on Monday in the public Facebook group “True Capitals Fan Zone” by a fan with the caption, “Coming to a Giant Food store near you soon!!!”

You guys, Ovi's getting a cereal! Get ready for...Ovi O's. This image was first leaked on Facebook and we've confirmed it is indeed real and coming soon to Giant Foods. (📷: True Capitals Fan Zone Facebook Group)

It is unclear how the fan obtained access to the photo.

It wasn’t long before the image of the cereal box was shared extensively on Twitter. The Facebook user who initially leaked the image deleted it shortly after uploading it to Facebook.

The cereal is expected to be found in Giant Food grocery stores in the near future.

According to the box, the breakfast cereal will be a “sweetened, toasted oat cereal with honey and natural almond flavor,” seemingly similar to Honey Nut Cheerios.

The box also features the Capitals’ Weagle logo and Ovechkin’s signature, with the words “Collector’s Edition” written across it as well.

The Washington Capitals won the Stanley Cup last year for the first time in the team's history, with Ovechkin becoming the first-ever Russian-born captain to win the cup.