Murder Case Opened in Germany Against Eritrean Accused of Pushing Mother, Child in Front of Train 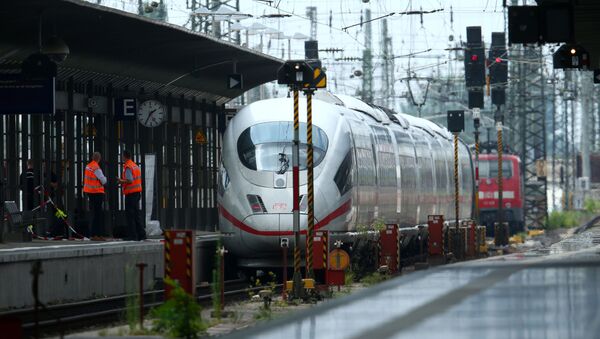 An eight year old boy was killed and his mother injured in the incident, which took place at Frankfurt’s main train station. The suspect is currently being held by police.

Authorities have opened a murder case against a 40-year-old Eritrean national accused of pushing a mother and her child under a high speed train on Monday morning, and of trying to push other people onto the track before attempting to flee the scene, a spokesperson from Frankfurt’s prosecutor’s office has told reporters.

“The prosecutor’s office is proceeding from the fact that we are talking about murder and a double attempted murder, and we are preparing to send the corresponding arrest warrant to the court,” the spokesperson said.

The prosecutor’s office confirmed that the suspect is a 40-year-old Eritrean national, and that the man has resided in Switzerland since 2006, is married and has two children.

He is suspected of pushing a 40-year-old woman and her 8 year old son under an incoming high speed train, and of unsuccessfully trying to push a 78 year old female passenger under the train as well.

The woman sustained injuries, but managed to role away to the side and escape, but the child “was crushed by the train and died on the spot,” the prosecutor’s office said. The elderly woman faced injuries to her shoulder.

The man was detained by other passengers, who chased after him and held him down until police arrived.

The spokesperson noted that no traces of drugs or alcohol were found in the suspect’s blood, and that a mental examination was being prepared. His motive remains unknown, and preliminary reports suggested that the suspect and victims did not appear to know one another.

Inter-ethnic tensions in Germany have grown since 2015, when the country welcomed nearly a million migrants from the Middle East and Africa. Chancellor Angela Merkel’s migrant policy has brought her heated criticism from conservative politicians, who have alleged that her ‘open borders’ policy has led to a sharp rise in crime and hate attacks.