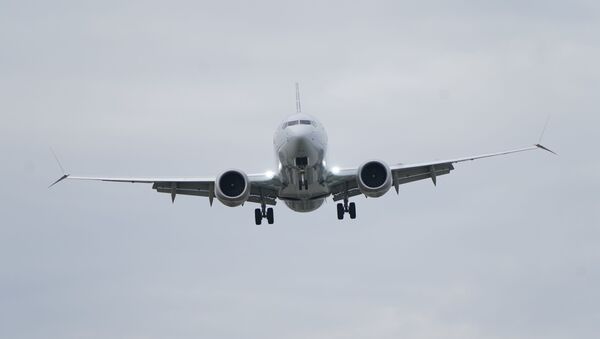 © REUTERS / Joshua Roberts
Subscribe
International
India
Africa
A new report by the New York Times reveals the extent to which Boeing was allowed by the US Federal Aviation Administration (FAA) to effectively self-regulate when it came to the Maneuvering Characteristics Augmentation System (MCAS) software, the failure of which caused the crashes of two Boeing 737 Max 8 jets, killing 346 people.

Dr. Alan Diehl, an award-winning aviation psychologist and safety consultant, a major 1990s air safety whistleblower and the author of the book “Air Safety Investigators,” joined Radio Sputnik’s Loud & Clear to highlight how the FAA has been passing off approval of airplane systems to manufacturers for years.

“Full disclosure: I used to be an aircraft design engineer,” Diehl told hosts John Kiriakou and Brian Becker. “Not for Boeing, but even back 40 to 50 years ago, we had what are called designated engineering reps; these were actual company employers [delegated by the FAA] that were in charge of certifying. But this system has gone out of control now. In 2005, Congress - lobbied by the [George W. Bush] administration - basically forced the FAA to authorize this extensive delegation of inspection authority” to manufacturers, he explained.

According to a New York Times article published over the weekend, Boeing carried out its own assessment of the MCAS, which was not tested by the regulator. In addition, the agency allowed two “relatively inexperienced engineers” to “oversee Boeing’s early work on the system,” according to two people familiar with the matter who spoke to the Times.

On March 10, a Boeing 737 Max 8 plane operated by Ethiopian Airlines crashed soon after taking off from Addis Ababa, Ethiopia, killing all 157 people on board. In October 2018, a Lion Air-operated 737 Max 8 crashed into the Java Sea just minutes after taking off from the Indonesian capital of Jakarta; all 189 passengers and crew were killed.

In both crashes, the plane’s new flight control feature, the MCAS, has been implicated as a cause. Initially designed to be a safety feature, MCAS is supposed to evaluate sensor data and push the plane’s nose down to keep it from stalling in the event that the nose of the plane reaches too steep an angle of attack (AOA).

The New York Times piece also reveals that during the development phase, Boeing introduced a riskier version of the MCAS that “relied on a single sensor” that could push the plane’s nose down even further than before.

“Boeing did not submit a formal review of MCAS after the overhaul. It wasn’t required by FAA rules. An engineering test pilot at the regulator knew about the changes, according to an agency official. But his job was to evaluate the way the plane flew, not to determine the safety of the system,” the Times reported.

Following the Lion Air crash, FAA officials decided not to ground the 737 Max, instead opting to publish a notice for pilots outlining emergency procedures. According to anonymous sources who spoke to the Times, an FAA manager told agency engineers to remove the only reference to the MCAS from the notice.

“If you look at the genealogy of this huge problem that ended up killing these 346 people … I call it the three D’s. In 1957, when the FAA was formed, it was given [the responsibility to] promote as well as regulate aviation. After 1996, there was a terrible Valujet crash, and Congress said, ‘Well, don’t do the promoting anymore.’ They’ve been doing it for decades. Most of the FAA employees, it’s in their DNAs; they want to see manufacturers and these airlines succeed.”

“So, the first problem, the first D, was the dual-mandate, historically. Then we had: in 1978, Congress deregulated the airlines, which affected the manufacturers. Now, everything became bottom line. Congress didn’t give the FAA any more employees to oversee this vastly expanded industry. And then finally, in 2005, Congress mandated increased delegation [to manufacturers],” Diehl explained.

And that is exactly what the sources told the New York Times: that the FAA has been heavily relying on manufacturers’ engineers to certify aircraft.

“For decades, the FAA relied on engineers inside Boeing to help certify aircraft. But after intense lobbying to Congress by industry, the agency adopted rules in 2005 that would give manufacturers like Boeing even more control. Previously, the agency selected the company engineers to work on its behalf; under the new regulations, Boeing could choose them, though the FAA has veto power. Many of the agency’s top leaders embraced the approach. It would allow the FAA to certify planes more efficiently and stretch its limited resources. The regulator had also been finding it harder to compete for talented engineers, their government salaries unable to keep up with the going rates in the industry,” an excerpt from the Times reads.

According to Diehl, Boeing has already taken most of the necessary steps required to make the 737 Max safe again.

“Clearly this airplane should never have been certified, the way the MCAS system operated. But … I think they’ve [Boeing] done most of the things they need to do to make it safe … I’m not sure if the FAA will mandate this, but I think they need one other type of fix, and that is a so-called AOA alert, and here’s why. It’s not a complicated software patch, but the pilots need to know if the MCAS is going to start shoving their nose down. If you give them a hint that this is an MCAS problem, I think if that had been on the earlier aircraft, we wouldn't have lost those two planes and 346 people,” Diehl explained.

On its website, Boeing has released a statement on the “AOA Disagree alert,” stating that it is “issuing a display system software update, to implement the AOA Disagree alert as a standard, standalone feature before the MAX returns to service.”