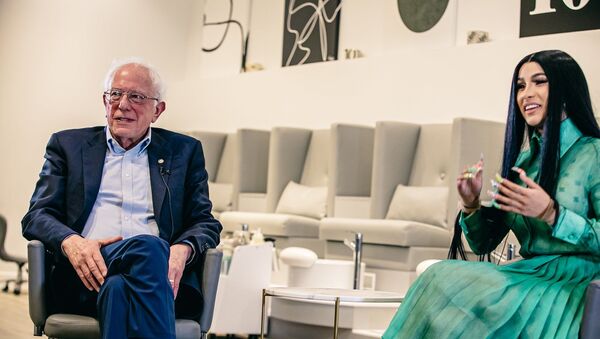 Commenting on his meeting with the rapper, Sanders said that he and Cardi now seek to “transform” the United States by increasing the involvement of young people in the political process.

As politicians in the United States prepare for 2020 elections, Democratic Senator and presidential candidate Bernie Sanders has revealed that he recently had a conversation about "the future of America" with none other than Cardi B, a rap artist who appears to have developed a penchant for political commentary.

Shedding light on their meeting on Twitter, the senator told his audience straight out that "Cardi B is right".

"Together, we’ll get millions of young people involved in the political process and transform this country," Sanders wrote, advising his audience to "stay tuned for our video coming soon."

Today @iamcardib and I finally met. We had a great conversation about the future of America.

And let me tell you: Cardi B is right.

Together, we’ll get millions of young people involved in the political process and transform this country. Stay tuned for our video coming soon! pic.twitter.com/L9mQ8InMZu

​The tweet elicited a mixed response online with social media users both pleased and amused with the development.

We're printing free tshirts with this logo on them at the DNC convention. Let's goooo! pic.twitter.com/75YLGbg3Nf

I was born to see this and I’m so thankful. Cardi B gotta rally with Bernie now and give us all a live show. 🔥🔥🔥 pic.twitter.com/sfNL1ALxaU

However, there was also no shortage of critics who had some unflattering things to say about both Bernie and Cardi.

Bernie... I remember the last time you got "millions of young people involved in the political process". You waited until the DNC convention and handed those millions over to Hillary Clinton, totally betraying your entire base and the promises you'd made to them. So anyway. -VJ

Hopefully she didn’t attempt to drug and rob you.

Anyone who is listening to these fools is devoid of intelligence.

This is who D’s want to lead them? Mmmmkay. 🤯 pic.twitter.com/LcSaQhQtBr

I think you have very good policies and I doubt you know much about Cardi B however I don’t think someone who drugged Men against their will should receive attention.