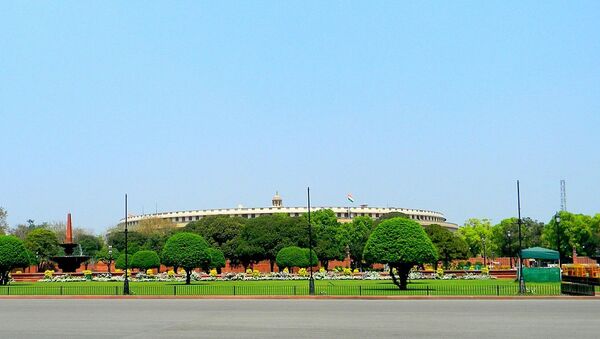 New Delhi (Sputnik): Accused of rape and attempted murder, a legislator of India’s ruling party was suspended on Tuesday following a massive uproar in Parliament and across the country.

Adhir Ranjan Chowdhury, leader of the opposition Congress party, said Sengar's alleged rape and attempt to muzzle the victim family’s were “a blot on civilised society” that has left “people in India feeling ashamed.”

Several politicians, human rights activists and others staged vociferous protests outside parliament, demanding prompt government action and justice for the victim who is struggling to survive on a ventilator.

Parliamentary Affairs Minister Prahlad Joshi, speaking in the Rajya Sabha, the upper house of Parliament, appealed to lawmakers not to politicise the case.

The local head of BJP in Uttar Pradesh, Swantantra Dev Singh, told media that Sengar has been indefinitely suspended from the party following the attempted murder of a teenage girl.

For God’s sake, Mr. Prime Minister, divest this criminal and his brother of the political power your party is giving them.

Its still not too late.#BJPSackSengar

Why do we give people like Kuldeep Sengar the strength and protection of political power and abandon their victims to battle for their lives alone?

This FIR clearly states that the family was threatened and apprehensive. It even mentions the possibility of a planned accident.

​The former chief minister and opposition leader in Uttar Pradesh, Akhilesh Yadav, said: "The case of the Unnao rape victim is unfortunate and condemnable. It has shocked women across the country.”

“Her father was beaten by police on instructions of BJP leaders. An FIR was registered after she tried to immolate herself. It's natural that people are questioning the government and the BJP MLA," he added.

The victim hails from Uttar Pradesh’s Unnao district. She was allegedly raped two years ago,  accusing BJP lawmaker Sengar of the crime. She later informed the police that Sengar despite being in jail was issuing threats to her and her family.

On Sunday (28 July), she along with her two aunts and a lawyer were critically injured when a truck hit their car near Rae Bareli while they were heading to meet her uncle in jail.

She is now battling for her life in a hospital trauma centre in Lucknow, where she is reported to be on life support with a damaged lung and several fractures.