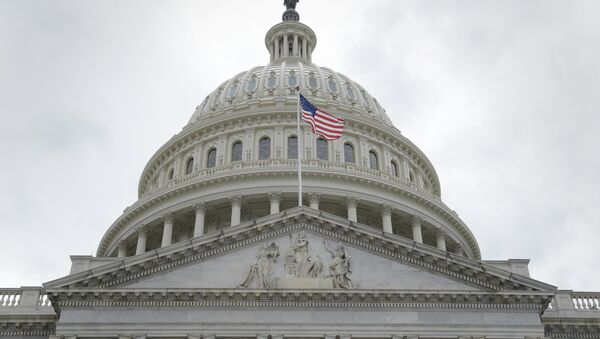 © AP Photo / Susan Walsh, File
Subscribe
The US Senate on Monday failed by a vote of 45-40 to override US President Donald Trump's veto of legislation passed by Congress that would have blocked the sale of certain weapons to Saudi Arabia, Reuters reported.

The legislation marks the latest effort by the Congress to punish Saudi Arabia over the ongoing atrocities in Yemen and the murder of journalist Jamal Khashoggi, both linked to the de-facto Saudi ruler, Crown Prince Mohammed bin Salman.

While the effort attracted substantial support from Republican lawmakers, Saudi critics in both houses of Congress failed to muster the two-thirds super-majority required to override a veto by a US President.

Last week, Trump vetoed a handful of resolutions passed in bipartisan fashion last month by both chambers of Congress that prohibited weapons transfers to Saudi Arabia, the United Arab Emirates (UAE) and other countries in Europe, due to concerns the munitions were being used to kill civilians in Yemen.

A UN human rights report released last year attributed most of the 16,000 civilian deaths in Yemen to Saudi-led coalition airstrikes on targets such as hospitals, schools, and open-air markets. The report noted that all parties to the conflict are likely responsible for war crimes.

The Saudi-led coalition has been carrying out airstrikes against the Houthis in Yemen at the request of President Abd Rabbuh Mansur Hadi since 2015.

The intense fighting has resulted in one of the world's most acute humanitarian crises, with about 22 million people in Yemen - the poorest nation in the Middle East - currently in need of assistance, according to UN figures.

Many Capitol Hill lawmakers have pointed out that the US decision to authorize military aid to the Saudi-led coalition is illegal, given a ban against providing military assistance to states with poor human rights records.

000000
Popular comments
The 45 senators that voted no to override Trump's veto are either directly paid in underground cash by Saudi Arabia or by US defense contractors. The blood of dead Yemenis women and children are on their hands, as simple as that!