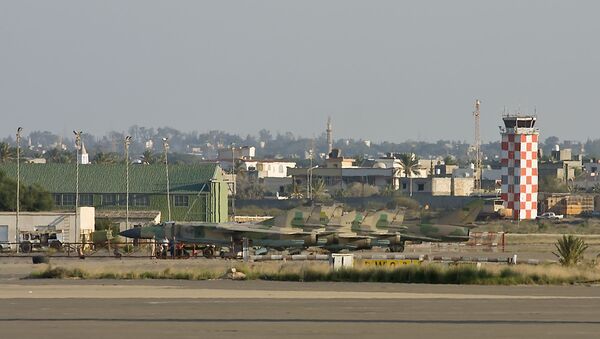 CAIRO (Sputnik) - Mitiga International Airport in the Libyan capital of Tripoli came under fire on Monday as passengers were boarding a flight operated by a local airline, which was set to fly to the Tunisian city of Sfax, the airport authorities said in a statement.

"The flights were suspended due to shelling", the authorities' statement released on Facebook said.

Two flights arriving from Istanbul and Tunis were redirected to Misrata Airport due to the shelling.

Mitiga International Airport regularly suspends operations due to shelling, which has intensified since the start of large-scale hostilities in the vicinity of ​​the Libyan capital in April.

Libya has been undermined by conflict after the country’s long-time leader Muammar Gadhafi was overthrown and murdered by US-supported Islamists in 2011. The eastern part of the country is governed by a parliament in Tobruk and backed by the Libyan National Army (LNA), led by Field Marshal Khalifa Haftar. The Government of National Accord (GNA), headed by Prime Minister Fayez Sarraj, operates in the country's western areas and is headquartered in the capital Tripoli.

In April, the LNA launched an offensive to retake Tripoli from the forces loyal to the GNA. The eastern Libyan forces have already taken under its control a number of settlements on its way to the capital, including the Tripoli International Airport.

Meanwhile, Russian Deputy Permanent Representative to the United Nations Vladimir Safronkov told the UN Security Council on Monday that the armed confrontation in Libya could turn the country into a major base for terrorists in the North African region.