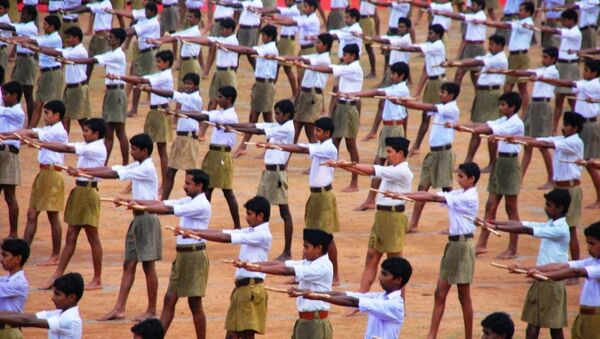 The school is named after former Chief of RSS Prof. Rajendra Singh, popularly known as Rajju Bhaiya and is located in Shikarpur in the Bulandshahr district of northern Uttar Pradesh. It will follow the syllabus of the Central Board of Secondary Education for public and private schools. Besides academic studies, the students will be given physical training and will be able to join any of the three armed forces upon graduation.

The brochure of the school notes that there is a shortage of about 10,000 officers in the Army, Navy and Air Force and that existing state-funded Army Schools are unable to satisfy the demand.

“This is an experiment we are doing for the first time in the country and the model can be replicated to other places in future,” Dr Ajay Kumar Goyal, in charge of the school said. The school would come under Vidya Mandir, an affiliate of RSS, which runs more than 20,000 schools across the country.

In the first year, the school plan to take 160 students with 56 places be kept aside for the orphans of army veterans.

Retired officers from the armed forces are set to suggest a specific curriculum for the students to equip them to compete for jobs in the army, air force and navy, said Goyal, although the school has no plans to appoint trained armed forces personnel as part of the regular teaching staff.

Construction of the school building is underway. It will have separate blocs for academics, a hostel for students, living accommodation for teachers and staff, medical facilities and a huge stadium. The cost of these facilities will be around Rs. 40 crore (approximately $58 million).

RSS strongly advocates army education and training. “The school will fulfil the dreams of children to serve the country as officers of the armed forces in future,” said Goyal.

Rashtriya Swayamsevak Sangh, which translates as National Volunteer Organisation, is a right-wing volunteer organisation, set up to provide character training and ingrain nationalistic feeling in Indian society. It has grown into one of the largest voluntary organisations in the world, with several affiliates promoting education and charity work.