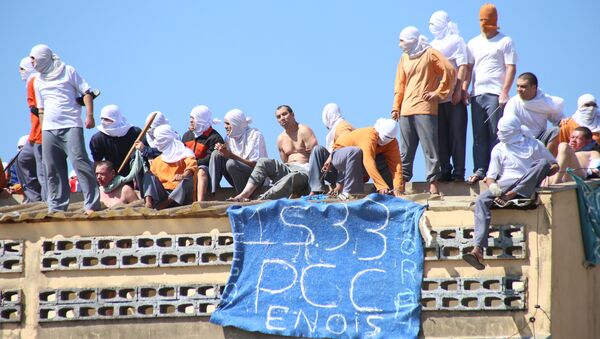 A total of 57 prisoners were killed as a result of a riot in a jail in Brazil's northern state of Para, Reuters reported. During the riot, 16 people were reportedly beheaded, while some other prisoners suffocated to death after a fire broke out in the building.

The incident was reportedly provoked by two crime gangs, which were in conflict with each other. The riot reportedly began at 7:00 a.m. local time (10:00 GMT) and ended at noon on Monday.

"It was a targeted act [...] The aim was to show that it was a settling of accounts between the two gangs", state prison director Jarbas Vasconcelos said in the statement, adding there was no prior intelligence that suggested an attack would take place, according to Reuters.

Brazil's incarcerated population has reportedly surged eight-fold in last decades to around 750,000 inmates, according to Reuters. Prison gangs originally formed to protect inmates and advocate for better conditions, but have come to wield vast power that reaches far beyond prison walls, Reuters said.

Human Rights Watch has repeatedly called on the Brazilian authorities to defend prisoners from gang violence.

According to the organization, many prisoners awaiting trial are held next to those who have already been convicted, which is against human rights principles, while harsh laws on drug possession lead to people being jailed for minor offenses and thus becoming vulnerable to recruitment by gangs.