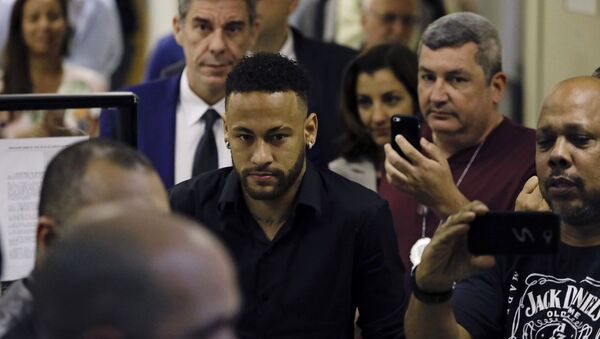 Brazilian police earlier questioned Neymar da Silva Santos Júnior over allegations that he raped a woman he met through social media in a Paris hotel in May 2019, AFP reported.

The Sao Paulo attorney general's office said Monday, cited by AFP, that police have closed the case due to lack of evidence. The decision will be reportedly sent to prosecutors on Tuesday, who will have 15 days to evaluate the case. A final decision will be made by a judge, according to AFP.

The affair dominated headlines in Brazilian media, as the country was preparing to host the Copa America last month.

Najila Trindade filed the complaint against Paris Saint-Germain forward Neymar on 31 May, saying he assaulted her after inviting her to visit him in Paris. Trindade's original lawyers reportedly walked away from her case because she had initially filed a complaint of physical abuse and not rape, according to AFP.

Trindade reportedly has maintained a recording, of which a few seconds have been leaked on social media, that includes the alleged evidence, which formed a part of the testimony presented to Brazilian police.

According to AFP, pictures were filmed on a tablet device which was stolen, according to Trindade, but the owners of the building where she lives denied claims of a forced break-in.

Neymar told police that an assistant and a technician were responsible for sharing the messages and photos.